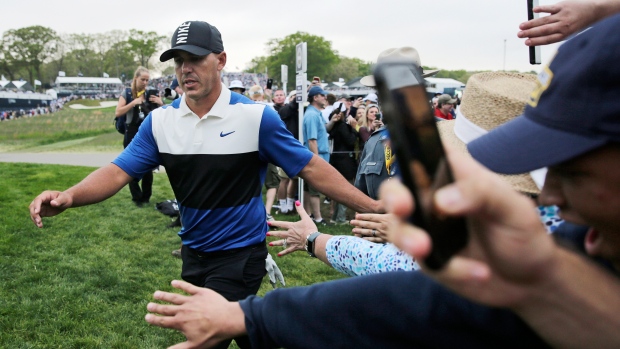 LAS VEGAS — Brooks Koepka spent the majority of his short off-season recovering from stem cell treatment on his left knee.

Koepka returns to competition this week in the Shriners Hospitals for Children Open, giving Las Vegas the No. 1 player in the world for the first time since Greg Norman in 1988 when the tournament was played in the spring.

He said after his pro-am round Wednesday that he had the stem cell treatment on his patella on Aug. 25, the day after the PGA Tour season ended at the Tour Championship. He said he was limping for a few days because the treatment was painful, but he was excited about finally feeling whole.

The treatment followed a year in which Koepka won three times, including the PGA Championship for his fourth major and his first World Golf Championships title.

“My knee was bugging me from about March on,” Koepka said, adding that the final four months were a “struggle.”

That makes him the third player from the top 10 in the world to have work done on his knee during the off-season, joining Dustin Johnson and Tiger Woods. None was too serious, as Woods plans to return in three weeks at the new tournament in Japan. Johnson is likely to return at the Hero World Challenge in the Bahamas the first week of December, followed by the Presidents Cup in Australia.

Koepka never talked about injury during the season. He said his knee made it difficult to walk down hills and that it kept him from practicing. He returned to practice a little over a week ago and feels this is the most prepared he has felt going into a tournament in some time.

With all that, he still managed to have the three victories, lead the PGA Tour money list and join Jack Nicklaus, Tiger Woods and Jordan Spieth as the only players to finish among the top four in every major. Koepka was runner-up at the Masters and U.S. Open.

It just wasn’t good enough to be voted PGA Tour player of the year. That award, a vote of the players, went to Rory McIlroy, whose three victories included The Players Championship and the Tour Championship, which gave him the FedEx Cup for the second time. McIlroy also won the Vardon Trophy for the lowest adjusted scoring average. Still, even McIlroy was surprised he won.

Koepka shrugged when asked about it Wednesday at the TPC Summerlin.

“I don’t play for awards,” he said. “I play to win tournaments.”

He also used an NBA reference, suggesting everyone knows that LeBron James has been the best in basketball for the last decade or more.

“LeBron has won only four MVPs,” Koepka said. “I’m pretty sure he’s been the best player.”

Koepka said he spent three or four weeks rehabilitating his left knee and was excited for a new season and fresh legs. He likes the TPC Summerlin and the way the field has shaped up. It is the strongest of the fall with six of the top 20 in the world, a list that features Patrick Cantlay, Tony Finau, Adam Scott, U.S. Open champion Gary Woodland and defending champion Bryson DeChambeau.

Koepka last played Las Vegas in 2017, finishing two shots behind Rod Pampling. He first played in 2014, his first full season on the PGA Tour. At the time, he had played only regular PGA Tour events and was three months away from winning his first one.

“At that time, I was trying to win, but it was trying to compete,” he said. “Now it’s just go out and win, and win as many times as I can. I enjoy it. I enjoy the competition. I want to be the best. Everybody is in the rearview mirror. I’ve just got to figure out how to consistently stay on top.”