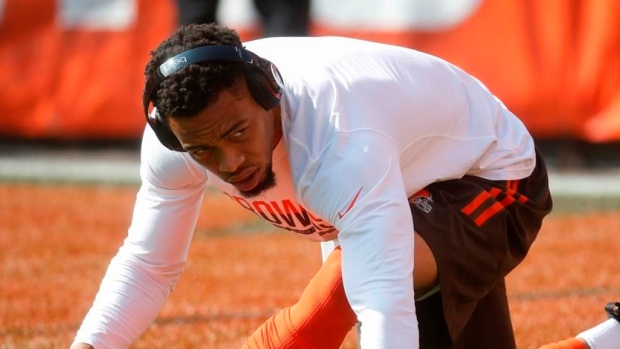 Once outstanding, he's been ordinary.

On Thursday, Haden explained why he's not been himself.

Asked about his excitement in possibly playing in this year's Pro Bowl as an alternate, Haden revealed that he has been battling two groin injuries for several weeks and that he will undergo surgeries shortly after the season finale against Pittsburgh.

Despite the injuries, Haden has stayed on the field as the Browns (0-14) struggle through the worst season in franchise history. It would have been easy for Haden to shut down weeks ago, but he didn't want to abandon his teammates.

"I mean, I love ball," he said. "I want to win. I want to win really bad. I want to win with my guys, and I feel like with me out there, it gives us the best chance to do so, and I don't want to cut them short."

The seven-year veteran said he should be fully recovered from the operations in two months.

Coming off a two-interception game against Baltimore, a performance that seemed to signal his return after he missed 11 games in 2015 with concussions, Haden injured his left groin in practice and sat out Cleveland's Sept. 25 game at Miami. He returned and played against Washington and New England the following two weeks, but then hurt his right groin before the Browns visited Tennessee on Oct. 16 and missed two more games.

Since then, he's been getting treatment and doing all he can to keep playing. Haden thanked Cleveland's training staff for helping manage the injuries, but he refuses to use them as reasons that his play has not been up to his usual standards.

"I'm out there playing, so it's no excuses," he said. "When you're out there you've got to be able to play at a top level."

This will be the second straight off-season in which Haden has needed surgery.

He underwent a procedure on his ankle in March and missed the Browns' off-season training program. He came back earlier than expected and didn't make his debut at camp until August.

Haden said missing so much time last year — he had injuries to his ribs, a finger, ankle and two concussions — changed the way he views his profession.

"Last season it put it perspective for me big time that it can be gone so fast," he said. "Next year will be my eighth year. I'm not getting any younger. .. I mean everything that we've been through, especially with my rehab and stuff.

"I'm in a different place. I'm with a different perspective. I just want to be with my dudes. For them to vote me as a captain, I feel like I have an obligation to them to make sure I'm out there and doing what I can do."