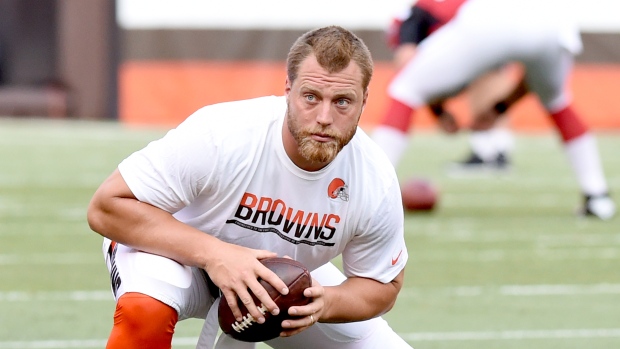 CLEVELAND — On his way out the door, Paul Kruger lowered his helmet and drilled the Browns.

The Browns began the final week of the preseason in tumultuous fashion as Kruger, a veteran linebacker and one of the team's leaders was released, Lee was traded to Carolina after failing to attempt a tackle in Tampa Bay, and the team waived defensive back K'Waun Williams, recently suspended in a dispute over an injury.

Talk about a manic Monday.

Kruger's departure stunned several of his teammates, who are still coming to grips with the team's new front office overhauling the roster with younger players.

"It was a shock, but this business, it never surprises you," said cornerback Joe Haden. "There's one or two every year that you kind of scratch your head on. It's a dude that you thought was going to be part of the change."

"It just shows guys you've got to be making plays. It's a what-have-you-done-for-me-lately business," he said.

Following his release, the 30-year-old Kruger blasted the organization on Twitter for a "wrong decision."

Kruger, who spent three seasons with the Browns, Kruger thanked owners Dee and Jimmy Haslam and the team's "relentless" fans before expressing his disappointment.

Kruger said his release was mishandled and called it "unfortunate and absolutely the wrong decision."

Although his production dropped from 11 sacks in 2014 to just 2 1/2 last season, Kruger brought savvy and leadership to Cleveland's young defence. He had worked with the Browns' starting defence throughout training camp and preseason. Just last week, Sashi Brown, the team's executive vice-president of football operations, said the team valued its veterans.

"The decision is an organizational decision," he said. "It's what we thought was best to do, so we move forward."

Kruger started 46 games and made 18 sacks in three seasons for Cleveland, which signed him as a free agent in 2013 after he helped Baltimore win the Super Bowl.

The Browns, who played poorly in a 30-13 loss to the Buccaneers on Friday, began their youth movement during the off-season by releasing linebacker Karlos Dansby, safety Donte Whitner and others. Kruger acknowledged his relief in surviving those initial cuts and wondered how long he might remain with Cleveland.

Now that Kruger's gone, second-year player Nate Orchard is the only outside linebacker remaining who has recorded a sack in an NFL regular-season game.

"We've got to grow up real fast," Orchard said.

Kruger's departure has fueled opinion the Browns are already looking toward 2017. Jackson said he's not concerned about outside judgments.

"Let me say this about anybody that we let go," he said. "We let people go because there is a performance that we want, it's not just him, I'm saying everybody."

Lee found that out.

Three days after Jackson scolded him on the sideline for not trying to tackle a punt returner on a 73-yard TD return, Lee was traded to the Panthers for punter Kasey Redfern and a 2018 fourth-round pick. A three-time Pro Bowler with San Francisco, Lee will help the Panthers offset the loss of Mike Scifres, who injured a leg on Friday.

Lee had a chance to knock Adam Humphries out of bounds, but slowed up and didn't make any attempt at a tackle. Lee set single-season team records for gross and net average in 2015.

Williams' strange situation ended with the team waiving him while he served a two-week suspension. The 25-year-old sat out the team's Aug. 12 exhibition opener with a sprained ankle. The team had expected him to play, but Williams refused saying he wasn't healthy enough to dress.

Williams made 10 starts at nickel back over the past two seasons.

Jackson declined to discuss the reasons for Williams being waived.

"I really don't want to get into that," he said. "Obviously, we have released several guys today and we are just moving forward. We had to get down to 75 (players). That is the league rule. That is what we have done, and he was part of that group."