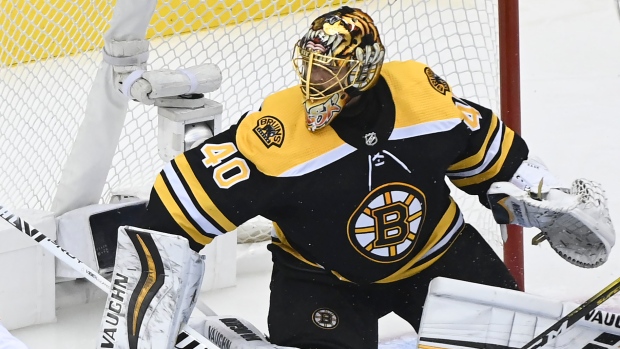 Tuukka Rask raised eyebrows after Thursday's Game 2 loss to the Carolina Hurricanes by saying the atmosphere without fans in Scotiabank Arena in the Toronto bubble is "dull" and comparable to an exhibition game.

"There's moments that, OK, there's little scrums and whatnot, but then there might be five minutes where it's coast-to-coast hockey and there's no atmosphere," the Boston Bruins goalie observed. "So, it just feels like an exhibition game. But we're trying our best to kind of ramp up, get energized and make it feel like a playoff game."

How did those comments go over in the room?

"First of all, Tuukka has his right to express his views and opinions," said Boston captain Zdeno Chara. "I don't think he meant anything bad about it. He was just being honest. It does feel a little bit different from other playoff experiences we've had ... We all have to realize it's an adjustment. It's something completely new and none of us have experienced it."

The Hurricanes, however, see things a bit differently.

"The games themselves have been incredibly intense," said coach Rod Brind'Amour. "I noticed that Game 1 against the Rangers, I was kind of shocked how emotional it was ... Does it feel different? Obviously, because the noise is not there and that's probably what he's referring to."

"Everyone's entitled to their own opinion," said Hurricanes goaltender James Reimer, who stopped 33 of 35 shots to out-duel Rask on Thursday. "We're playing with a lot of passion and a lot of emotion right now so it feels like we're in a fight."

While the atmosphere observations created waves, Rask's assessment of his own play may be more concerning to the Bruins.

"I'm not in prime shape," the 33-year-old admitted. "Trying to get there. I'm just trying to have fun and play the game. I'm not stressing too much about the results and whatnot. It's August and I haven't played hockey in forever. Just go out there, have fun and see what happens."

Bruce Cassidy has a quality backup option in Jaroslav Halak, but "anticipates" going back with Rask in Saturday's Game 3. He didn't see any bad goals go in on Thursday, but also expects Rask can take his game to another level.

"His game can grow like all of our games," the Bruins coach said. "The goaltending position is probably a tougher one with that long a layoff to get yourself up to speed, not a lot of room for error, so I do understand ... We know he can play better and hopefully we'll be better in front of him and he'll give us the extra save and it will work out in our favour."

Rask has a .904 save percentage in four games since arriving in the Toronto bubble.
---

After missing Thursday's game with an undisclosed injury, David Pastrnak did not skate on Friday.

"He could possibly play tomorrow," Cassidy said of the 48-goal winger. "We'll make that evaluation in the morning.

"He did what he could with his skill-set to help that line," Cassidy said. "No one's going to replace Pasta, but if guys can go in and complement Bergy and March and help them create some offence, then they've done a good thing and I thought Anders did some of that last night. That doesn't mean he'll go back there, but I don't think that was the reason we fell a goal short."

Cassidy revealed he is planning on making lineup changes both up front and on defence for Saturday's matinee.
---

"I don't have the answer if he's been up for Norris Trophies, but he should be," Cooper said. "[Victor] Hedman has broken through that door and it’s obviously richly deserved. You're getting to watch in this series some of the premier defenceman to ever play in this game. Just take two of the plays Hedman and Jones made: Game 1 Hedman has to track [Cam] Atkinson down for a game saver and last night Jones has to track [Barclay] Goodrow down to [prevent] a potential game-tying goal. There's no quit in those guys. They have that much energy in the tank after all the hockey that has been played not only for us, but Columbus in the Toronto series.

Before logging a record-setting 65 minutes and six seconds in the Game 1 five-overtime marathon, Jones was already leading the league in ice time in the playoffs. Jones has also chipped in a goal and two assists and is plus-2 despite facing the top offensive talent on the Leafs and Lightning.

A couple days ago, Jackets coach John Tortorella highlighted Jones' defensive play and, like Cooper, suggested the 25-year-old is underrated.

"I think on this stage people are finally starting to see what we've seen for a number of years," Tortorella said. "I don't think he gets enough credit for his willingness and how much he defends. He's just outstanding in the room he takes and his willingness to defend. Some other players are talked about for putting up offensive numbers and having a lot of ice time, but I like to see someone who defends as hard as Seth Jones in this league."

Jones told TSN in an interview during the season pause that his personal goal is to one day be named the NHL's top defenceman.

"There's still a lot of room for improvement," Jones said of his game. "I like to play in all situations – power play, penalty kill, really whatever the team needs me to do I'll do. Hopefully, I can continue to grow. It's a dream of mine to be up for the Norris and to win the Norris so I'm definitely pushing for that."

​Jackets goalie Joonas Korpisalo is in a zone right now having stopped 230 of 239 shots faced in the playoffs (.960 save percentage). He actually seems to be getting better as the workload increases. The Finn has stopped 121 of 125 shots against the Lightning through 210 minutes of play in the series.

So, what can the high-octane Tampa attack do to breakthrough?

"We're putting up a ton shots right now and he's kicking out rebounds," observed Blake Coleman. "We're just not getting the second chances. They do a good job of packing the house so it’s about being a little more violent with our arrivals to the net and not forcing plays and not getting frustrated. We got to understand it might be a low-scoring series and you might have to win games 2-1."

Pat Maroon, another new arrival to Tampa this season, believes Korpisalo is being allowed to see the ice too well.

"I don't think our forwards are doing a really good job of getting in his eyes," said Maroon, a Stanley Cup champion with the St. Louis Blues last year. "I think when you get in a goalie's eyes he gets moving and you get those second and third opportunities ... he's been tremendous for them right now so we got to make it more difficult."

The coach, however, isn't really looking for any big changes up front. Cooper acknowledged the Lightning took their foot off the gas a bit – an "exhale" – after jumping out to an early lead in Game 2, but he likes what he's seeing overall.

"We got to get inside them and I think we've done it," Cooper insisted. "If you look at both games, we've actually blocked potential goals, especially last night. I mean, [Mikhail] Sergachev was shooting one in the net and it hit Goodrow right in the butt and we would never tell Goodrow to not be where he was, so at some point they're going to go."

Cooper was asked for an update on Lightning captain Steven Stamkos who has yet to play since the season restarted.