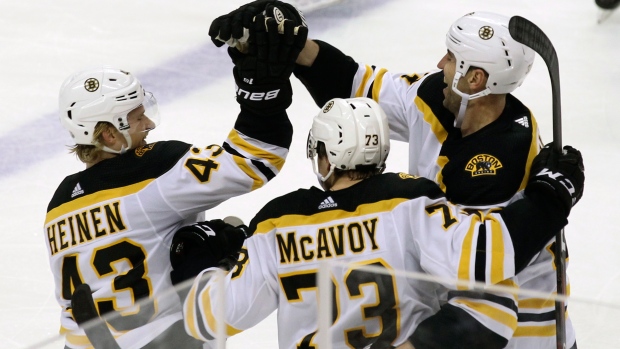 SUNRISE, Fla. — Patrice Bergeron, David Pastrnak, Brad Marchand and Zdeno Chara each had a goal and an assist help the Boston Bruins clinch a playoff berth with a 7-3 win over the Florida Panthers on Saturday night.

Steve Kampfer, Karson Kuhlman and Noel Acciari also scored, and Danton Heinen had two assists for the Bruins. Jaroslav Halak stopped 31 shots and also had an assist as Boston won its fourth straight.

The Bruins took control with five goals in the second period.

With Boston leading 2-1, Chara's shot from the high slot beat Montembeault at 5:05 for his 200th NHL goal. Kuhlman made it 4-1 as he grabbed the puck at the red line, skated in, and fired a shot in at 6:38 for his second career goal.

Hoffman grabbed a loose puck in the neutral zone, skated in and fired the puck past Halak at 10:04 to pull Florida to 4-2.

Kampfer and Pastrnak scored 48 seconds apart to stretch the Bruins' lead to 6-2 with 3:24 to go in the middle period.

Trocheck scored a power-play goal at 3:57 of the third to get the Panthers within three.

Florida's Aleksander Barkov landed face down on the ice after a collision with Chara with 3:04 left in the game but left under his own power.

Acciari gave the Bruins a 1-0 lead 2:23 in. David Backes passed from behind the net to Acciari, who was alone in front and his shot got past Montembeault.

Marchand doubled the lead when he took a feed from Bergeron from behind the net and shot the puck in from the low slot at 28 seconds of the second period.

The Panthers answered 24 seconds later as Hawryluk one-timed the puck in from in front.

Panthers: At Toronto on Monday night.