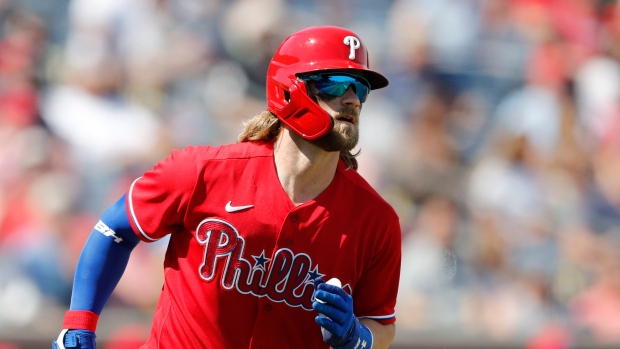 CLEARWATER, Fla. — Bryce Harper launched an opposite-field shot for his third homer in two days, prompting a few fans to yell "M-V-P" as he circled the bases.

It's only spring training but expectations are high.

"I'm OK with it," manager Joe Girardi said after the Philadelphia Phillies beat the Toronto Blue Jays 5-3 on Thursday. "He's been doing it for a long time. He was 16 when he was on the cover of Sports Illustrated. He's had a lot of practice. He has a personality where he's able to stay focused on what he needs to do and he doesn't get caught up with what's going on around him."

Harper embraces the pressure and says he loves playing in Philadelphia because fans hold him "accountable." The star right fielder told a Philly radio station before the game that he wants "to run through a wall for this city."

The 27-year-old slugger is entering his second season with the Phillies after signing a $330 million, 13-year contract last year that was the richest in baseball history until the Mike Trout got a record deal from the Angels few weeks later.

The Phillies are counting on Harper to help them end an eight-year post-season drought. The six-time All-Star was a box office hit in 2019 when the Phillies had the largest increase in attendance in the majors. They drew 569,297 more fans than 2018 while the league's average attendance overall in dropped 1.7 per cent.

But the team finished 81-81 and manager Gabe Kapler lost his job.

"We need to take that next step and we actually have to do it," Harper said. "We can't just talk about it."

Harper batted .260 with 35 homers and a career-high 114 RBIs last year when he missed the first couple weeks of spring training because he was still considering where to sign in free agency. His life is less hectic now that he's settled into Philadelphia and doesn't have to think about buying a house and everything else that goes with moving. Harper and his wife, Kayla, welcomed their first child last August so he's also settled into fatherhood.

At the plate, he's in midseason form.

Harper crushed a homer way out to right field and also drove one out to left-centre on Wednesday. He's 4 for 10 with 10 RBIs in five games.

"That's always a good sign and he's always done that," Girardi said of Harper's opposite-field homers. "He has power to all fields. When hitters are able to do that, they're in a good spot and the big key is we have three weeks left. We don't want our guys to get bored or peak too early so you try to manage his workload the rest of the way but he's in a good spot right now."

Girardi is most impressed with the way Harper handles his business.

Harper spent his first seven seasons in Washington and was the 2015 NL MVP. He went to the post-season four times but the Nationals didn't win a series. After Harper left, the Nationals won the World Series. But Harper wasn't bitter.

"They did such a great job and I was so happy and excited for them and the players I played with," Harper said.

Notes: RHP Zack Wheeler allowed two runs and three hits in 2 1/3 innings in his second spring start after signing a $118 million, five-year deal with the Phillies. "I fell behind a lot and I need to get ahead and get first-pitch strikes," Wheeler said. "With more reps, I'll get comfortable and do what's normal." ... Phillies RHP Seranthony Dominguez threw a scoreless inning in his spring debut. "I'm ready right now," said Dominguez, who missed several months last year with an elbow injury. ... Blue Jays slugger Vladimir Guerrero Jr. hit his second spring homer in the sixth inning, a solo shot off Deolis Guerra.