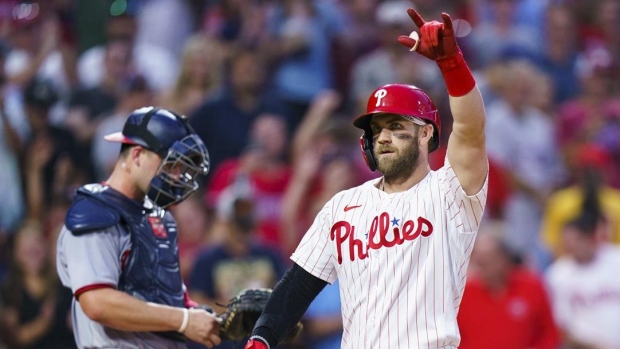 PHILADELPHIA (AP) — Bryce Harper ended the longest home run drought of his career and Kyle Schwarber hit his 37th homer of the year, tops in the N.L., to help the Philadelphia Phillies beat the Washington Nationals 8-5 on Saturday night.

Harper homered for the first time since June 5, a span of 102 plate appearances that also included a two-month stint on the I.L. with a broken thumb. It matched the longest stretch of plate appearances between homers in Harper’s career, originally set in 2014 when he was a member of the Nationals.

“When he’s in the lineup he just steps into the box and there’s a presence there,” Schwarber said of Harper. “Pitchers feel it. It’s an intimidating presence, and rightfully so.”

Schwarber homered for the first time since Aug. 29 to stay atop the league leaders.

The Phillies (77-62), kept pace in the N.L. wild card race in a three-team race for the final two wild card spots with San Diego and Milwaukee. The Phillies, who entered play a half-game behind the Padres, and three-and-a-half games ahead of the Brewers, have a tiebreaker advantage on both teams.

“He wasn’t hitting the ball at the beginning of the year in Anaheim,” Phillies interim manager Rob Thomson said of Marsh. “He had a lot of swing and miss. But (hitting coach Kevin) Long saw some stuff and they’ve been working on it. Brandon is a diligent worker and we’re seeing some good things out of him.”

It wasn’t a great outing for Suarez, but he struggled to get through four innings in each of his previous two starts, so get into the seventh inning and throw 103 pitches were both important outcomes.

“It was good to do that after my last two outings,” Suarez said. “The last time I threw 100-plus pitches was when I hurt my back, so it felt good to be able to do that.”

Things got hairy for the Phillies in the ninth inning as the Nationals scored a run and loaded the bases against Connor Brogdon, but the Phillies reliever was able to strike out Nelson Cruz to end the game.

Joey Maneses hit a two-run homer and Lane Thomas had three hits and two RBI for the Nationals (49-91), who lost for the fourth time in the last five games and fell to 2-12 for the season against Philadelphia.

When the Nationals traded superstar outfielder Juan Soto to San Diego at the trade deadline, they called up Maneses, a 30-year-old journeyman minor leaguer who had never played in the majors. Since then, all he’s done is hit safely in 28-of-34 games and is hitting .321 with nine doubles, eight homers and 20 RBI. Meanwhile Soto has hit just .223 with three homers and six RBI since joining the Padres.

Nationals: LHP MacKenzie Gore, arguably the prize piece of the Juan Soto trade last month, is expected to pitch the third inning Sunday for Triple-A Rochester. Washington manager Dave Martinez said the Nationals would like to get the top prospect’s pitch count up to 75 pitches before he comes off the IL. Gore has been out with left elbow inflammation since before the trade.

Phillies: RHP Seranthony Dominguez will return to the bullpen Sunday and RHP Zach Eflin will join him there Tuesday. Dominguez was the Phillies closer before landing on the IL with triceps tendonitis last month. Eflin was in the starting rotation but will come back as a multi-inning relief option. ... RHP Zack Wheeler is getting closer to returning. He threw 15 pitches off of a mound Saturday. He needs at least two bullpen sessions before returning to the rotation. Interim manager Rob Thomson said that won’t happen until after the team’s upcoming road trip, which ends on Sept. 18.