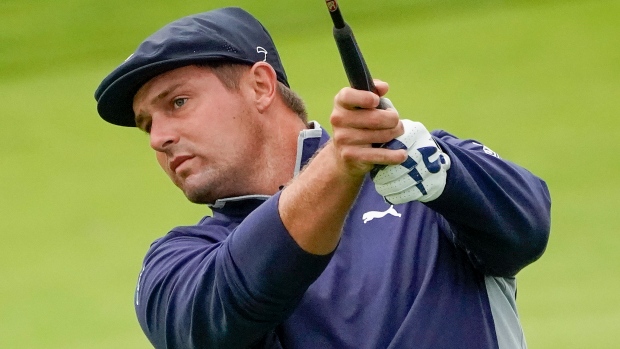 Coming into the U.S. Open, Bryson DeChambeau refused to change his game plan from the one he’s used this year. Hit it as long as possible, find it and play from there.

Most weeks on the PGA Tour, that strategy works, especially when you are built like the Incredible Hulk and the course setup is generally friendly. But at a U.S. Open where the rough is deep and gnarly, it seemed wiser to ease back on the throttle and focus on fairways first, distance second.

Not DeChambeau. Through 36 holes, he’s proved that he can play full out, posting a second-round 68, one of just a handful of under-par rounds on Friday, as Winged Foot became the stiff test that was expected.

“I want it to play as hard as possible,” said DeChambeau, who shot 69 in the opening round. “I feel like there's so many holes out here that I can take advantage of that some people can't.”

His second round created a colourful scorecard with five birdies, five bogeys and an eagle. He found seven of 14 fairways and hacked it out of the rough on the ones he missed.

The hulking golfer, who has added 40 pounds of muscle this year, is averaging 379.9 yards off the tee this week with his vicious lash of a swing. On his final hole on Friday, the 557-yard par-five ninth, it was on full display as he hit driver-pitching wedge onto the green, setting up that closing eagle.

But it’s not just his driver that has put him up at the top of the leaderboard. He’s seeing good performance from most parts of his game.

“I feel like my irons are great, the wedges are better, and short game needs to be worked on just a little bit,” assessed DeChambeau. “But I would say it's been good so far, and that's what I'm going to hopefully do this weekend.”

Beyond his swing, the 27-year-old from Modesto, Calif., is trying to better the mental side of his game, trying to stay even-keeled throughout the ups and downs that come with professional golf.

He trains with Neuropeak, a company based in Grand Rapids, Mich., that works to help athletes improve performance by strengthening the autonomic nervous system through breathing.

That may sound way above most people’s comprehension, but DeChambeau is not most people. Almost everything he does in golf stems from his science background, from his irons all being the same length to building his muscles to increase his swing speed.

On Thursday night, he spent extra time at the range after his round recalibrating the distance on how far his wedges were flying.

“It was just saying on the devices that I was hitting it shorter than what it was actually going,” DeChambeau tried to explain. “So, for example, like we calibrated -- OK, this is -- I'm trying to make it as easy as possible.

“So for me, my 47-degree flies normally 145. Well, last night I was hitting shots and it was flying 155. That's what we were on the normalizing mode with that wind. And we just didn't calibrate correctly.”

We don’t really have to understand how it all works, at least not the way DeChambeau does. But we can appreciate that at the halfway mark, he’s in a great position to capture his first major title.

There is, of course, still a long way to go and the rough may yet grab enough of his tee shots that he slips back into the pack. But he’ll use anything he can to his advantage, except possibly imposing his will on the tournament.