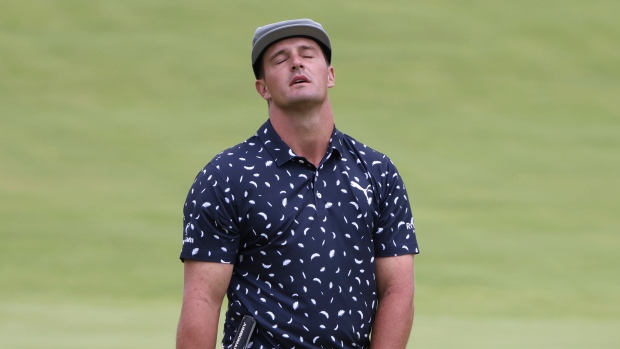 TOKYO (AP) — Known for their towering drives, Bryson DeChambeau and Jon Rahm won’t make it to the tee box at the Olympics.

The last two U.S. Open champions became the best-known athletes to drop out of the Tokyo Games on Sunday after testing positive for COVID-19.

DeChambeau’s positive came before he left the United States for Tokyo. The musclebound American famous for his game-changing swing speed will replaced by Patrick Reed.

“I am deeply disappointed not to be able to compete in the Olympics for Team USA,” DeChambeau said in a statement. “Representing my country means the world to me and it is was a tremendous honor to make this team.”

Rahm was flagged for COVID-19 for the second time in two months — he had a six-shot lead at the Memorial in early June when he was forced to withdraw because of a positive test. The Spaniard said he had gotten his final vaccine shot fewer than 14 days before that positive.

Several dozen Olympic athletes have tested positive either before leaving for Tokyo or after they arrived. Last week, U.S. tennis player Coco Gauff also tested positive before she left the United States.

Reed was scheduled to undergo testing Sunday and Monday to clear himself to compete in Tokyo. The the first round of the men’s tournament at the Kasumigaseki Country Club is set for Thursday. He will join Justin Thomas, Collin Morikawa and Xander Schauffele on the four-man U.S team.

It was not immediately clear who, if anyone, would replace Rahm on the Spanish team.