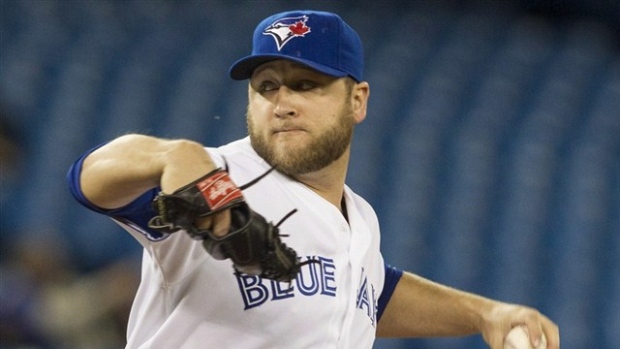 TORONTO - The Toronto Blue Jays will try to capture a second straight game versus the rival New York Yankees with Mark Buehrle set to take the hill Tuesday in the middle portion of a three-game home series.

With a win tonight, Buehrle will match Yankees ace Masahiro Tanaka for the most wins in the majors with 11. Buehrle is 10-4 with a 2.32 earned run average, but has lost his last three starts, including a 7-3 setback at Yankee Stadium last Wednesday.

Buehrle allowed three runs -- two earned -- and six hits in six innings. He has served up a home run in each of his previous three starts and hasn't fared too well in his career against New York, going 1-11 with a 5.84 ERA in 17 starts. Buehrle is 5-2 in seven starts at home this season.

The Blue Jays returned home to start a nine-game stay and kicked off the residency with Monday's 8-3 victory over the Yanks. Adam Lind hit a three-run homer during a six-run second inning and finished with four RBI, while Edwin Encarnacion collected three hits.

Marcus Stroman pitched well to pick up the win and limited the Yankees to a run and three hits in eight innings with seven strikeouts and one walk.

"Actually getting going was fine, it's the slowing down," Stroman said.

Toronto is 1 1/2 games ahead of Baltimore and 2 1/2 in front on New York for the AL East lead and will also host the Chicago White Sox and Milwaukee Brewers on this homestand. The Jays, who won for the second time in the last seven tries, are 21-17 as the host.

The Yankees have lost three in a row since winning four straight and didn't get much help from Chase Whitley on the mound last night. Whitley was tagged for eight runs and 11 hits in 3 1/3 innings.

"I couldn't command the ball at all," Whitley said. "I couldn't execute the pitches I wanted to throw."

Mark Teixeira homered for the Yankees.

Taking the mound for New York Tuesday will be David Phelps. Phelps is 3-4 with a 3.86 ERA and has won back-to-back outings after losing the previous four. In a 6-4 triumph over the Blue Jays last Thursday, Phelps delivered seven innings of two-run ball, struck out seven and walked two.

The Yankees are 5-2 against the Blue Jays this season.