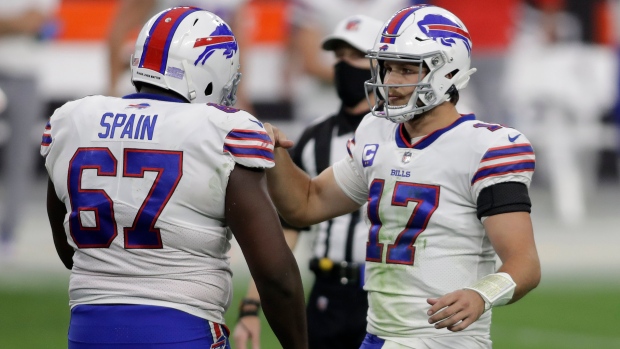 The Buffalo Bills have released guard Quinton Spain, the club announced on Wednesday.

Spain started all 16 of the Bills' games last season, but has only appeared in four this season.

The announcement comes after a cryptic tweet from Spain earlier in the day which seemingly indicated his departure was at hand.

I want to say thank you to the Bills and #BillsMafia Just time for a change, but I appreciate y’all. pic.twitter.com/N8B2MTZ9EE

"I want to say thank you to the Bills and Bills Mafia," Spain wrote. "Just time for a change, but I appreciate y'all."

A native of Petersburg, VA, Spain was undrafted out of West Virginia before signing with the Tennessee Titans.

Spain appeared in 50 games over four seasons with the Titans before signing with the Bills as a free agent in the spring of 2019. He signed a three-year extension with the Bills earlier in 2020.