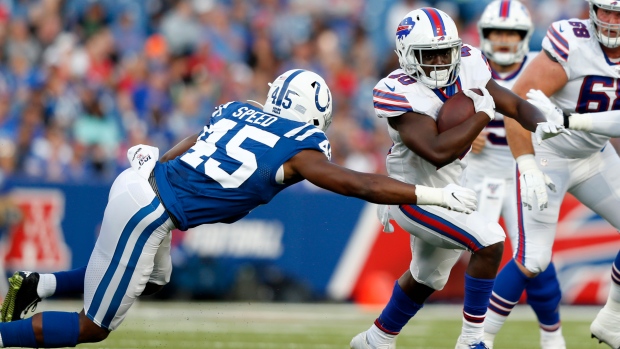 The Buffalo Bills will be without the services of running back Devin Singletary for their home opener.

Head coach Sean McDermott confirmed that the rookie out of Florida Atlantic will be unavailable for Sunday's game against the Cincinnati Bengals, having picked up a hamstring injury last Sunday in a win over the New York Giants.

Through two games, Singletary has rushed for 127 yards on 10 carries and a touchdown.

Cornerback Taron Johnson will also miss out with a hamstring injury, while fellow CB Tre'Davious White is expected to play, having been limited at practice this week with a neck injury.

There had been hope that former Bengal, Tyler Kroft, would be able to make his season debut on Sunday, but the tight end has also been ruled out with an ankle injury.

#Bills TE Tyler Kroft, who injured his ankle in practice Thursday, is not playing this weekend. But source said the low-ankle sprain does leave him a chance to make his season debut next week.

If the Bills were to defeat the winless Bengals on Sunday, it would mark the first 3-0 start to the season for the club since 2008.