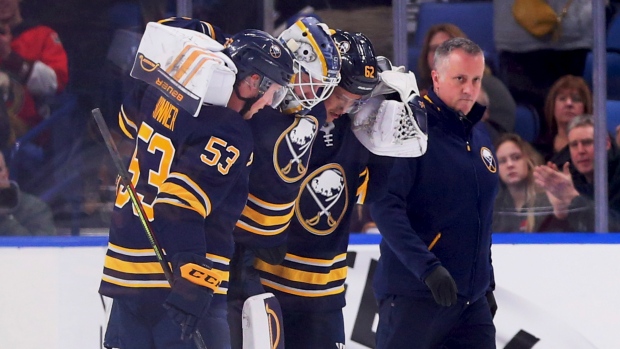 BUFFALO, N.Y. — If the Buffalo Sabres intend to make a late-season playoff push, they're going to have to do so without their starting goalie for much of the next month.

Linus Ullmark will miss between three and four weeks with an injury to his right leg, the Sabres announced Wednesday, a day after he was hurt in a 5-2 loss to Ottawa.

The team wouldn't reveal the nature of the injury, though Ullmark was unable to place any weight on his right leg while being helped off midway through the third period Tuesday.

Ullmark was untouched in his crease while tracking Ottawa forward Artem Anisimov circling the net. Ullmark's left skate slipped out from under him, and he fell back with his right leg bent under him.

He has a 16-14-3 record and has held the starting role since mid-November after spending the first six weeks of the season splitting the duties with Carter Hutton.

The injury comes as the Sabres returned from a 10-day break sitting 11th in the Eastern Conference standings, and 10 points out of a playoff berth. And they're in the midst of playing nine of 10 games at home. They host Montreal on Thursday.

Now Buffalo must turn to Hutton, who is 0-7-4 in his past 11 starts and hasn't won a game since late October. The Sabres also called up minor leaguer Jonas Johansson, who has yet to play in the NHL.

"We know Carter can step up here. He had an excellent start of the season, some struggles of late," coach Ralph Krueger said. “We feel Carter is ready to be the guy to step in here and carry the ball.”

Hutton isn't worried about his slump, which came after opening the season with six wins, nor his lack of playing time. In his lone start since Dec. 21, Hutton allowed five goals on 34 shots in a 6-3 loss to Vancouver on Jan. 11.

"I don't think inside this room anyone has ever doubted me or anything like that," said Hutton, who has mostly served as a backup over eight NHL seasons.

"It's not like I just fell off a cliff here. It's been a rough go, but it's just hockey," he added. “Now I have to get in there and just play my game.”

The Sabres promoted Johansson over the more experienced Andrew Hammond, who has a 27-15-6 record in 56 NHL career games.

"I think it's excellent to take a look at him right now with the record he has," Krueger said. “But it's more than anything, psychologically how he's grown and developed thus far this season.”

Johansson learned of his promotion shortly upon returning to Rochester after competing in the AHL all-star game in Ontario, California.

"I'm just trying to take it all in now, trying to enjoy every moment," said Johansson, who joked about calling and waking his parents in Sweden to inform them of his promotion. “That's something you only had in your dreams before. Now it became a reality.”