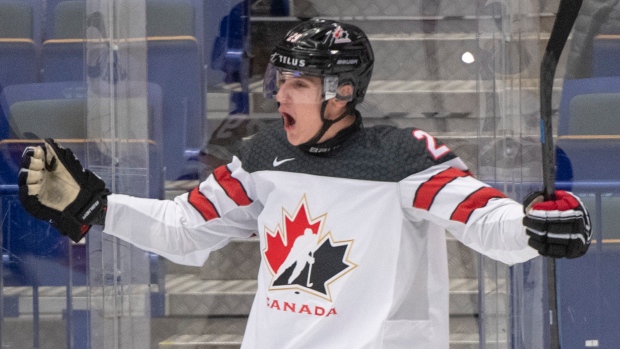 OSTRAVA, Czech Republic — In a do-or-die game where one shot might be the difference between gold and bronze, you dish the puck to Nolan Foote.

He is Team Canada’s weapon - and he will be in the lineup for Saturday’s semifinal against Team Finland after avoiding a suspension following a hit that got him ejected in the first 53 seconds in Thursday’s quarterfinal.

That’s a huge sigh of relief because you just never know with the IIHF’s discipline directorate.

“I don’t think what Nolan did was anything wrong,” assistant coach Andre Tourigny said of Thursday’s blown call against Slovakia. “Mistakes happen from players, coaches or officials, so that happened, but it’s behind us.”

Now, the trick for Finnish goalie Justus Annunen - who shutout the Americans in the quarterfinal - will be keeping Foote’s howitzer in front of him.

Foote, 19, has three goals in four games, including two on Team Canada’s tournament-best power play (11-for-25). His snipes have been something to behold.

“It’s a bullet,” teammate Kevin Bahl said. “You just give him a one-tee and it’s basically 50-50 whether it’s going in. He’s got an absolute cannon.”

It’s hard, it’s fast, and it’s deadly accurate. Call it the Kelowna Rocket, since that’s where he plays junior hockey under his father and coach, Adam, a 19-year NHL veteran.

“It’s pretty impressive to watch how small of a window he’s shooting at,” said Avalanche prospect Bowen Byram, who has been setting Foote up for those power play one-timers. “It’s pretty, pretty tight. He gets it away quick and it hits a small area.”

It might be unfair to compare a teenage Foote’s blast to Alex Ovechkin, maybe the best goal scorer of all-time, but Team Canada coach Dale Hunter had the best seat in the house to watch the Great Eight as the Capitals' head coach for 60 games in 2011-12.

“It’s right up there,” Hunter said of Foote’s shot next to Ovechkin. “Oh yeah, in the old days, [it’s like] Brett Hull … to shoot a one-timer like that, it’s got to be perfect timing and he’s been hitting it.

“I wouldn’t want to block it, put it that way. He’s got a rocket. It’s a special shot. When you can hit a corner like that, it’s special.”

Foote even uses a variation of the Ovechkin curve, a wicked toe hook. It’s so severe that he has to aim low because it rises so quickly.

The physics in play are incredible.

“Yeah, there’s some force and velocity to that thing,” assistant coach Mitch Love said. “He’s been doing this a long time, working on the outdoor rinks in Colorado for a long time.”

In some ways, Foote is Team Canada’s hired gun. He was born in Denver on Nov. 29, 2000, the same season his dad helped the Avalanche capture their second Stanley Cup. Adam Foote played 1,154 NHL games and represented Team Canada twice in the Olympics.

But Foote and his older brother, Cal, played their minor hockey for the Colorado Thunderbirds organization. As dual citizens, they had a choice to make.

They decided to follow in their dad’s Foote-steps and pledge allegiance to Hockey Canada.

“I like it on the side I’m on now,” Love said. “It’s better having him bombs away here, instead of on our club team in the Western League - because I’ve seen this shot for a long time. It’s a threat. It’s a weapon.”

With responsibilities to coach the WHL’s Rockets, Adam Foote was unable to make it over to the Czech Republic to see Nolan play at the World Junior Champonship this year.

“He wants to be here, he was at Cal’s [World Juniors in Buffalo],” Foote said. “But he’s coaching back home and he loves coaching. He gives me pointers every day through messages. I think when it’s over messages, he seems more like ‘Dad’ but when it’s at the rink, he’s definitely ‘Coach.’”

Nolan has been relying more on his brother for advice.

Both Nolan and Cal were drafted by the Tampa Bay Lightning in the first round, two years apart. They couldn’t be more different players. Nolan is a left-shooting winger and Cal is a right-shooting defenceman, but they are a tight pair as Left Foote and Right Foote.

They have kept in touch daily throughout the tournament.

“Definitely some down time whether it’s after dinner or after practice, I’ll try and give him a call,” Foote said. “He’s there and it’s good advice. So it’s been awesome. We definitely talk about the game and what to do better, he gives me advice on ‘D’ zone coverage and how to play that.”

Foote has been navigating the power play seams just fine, as he shoots to match Cal’s 2018 World Juniors gold medal for the family mantle.

“I’m getting them on net,” Foote said, smiling. “It seems to be working right now.”