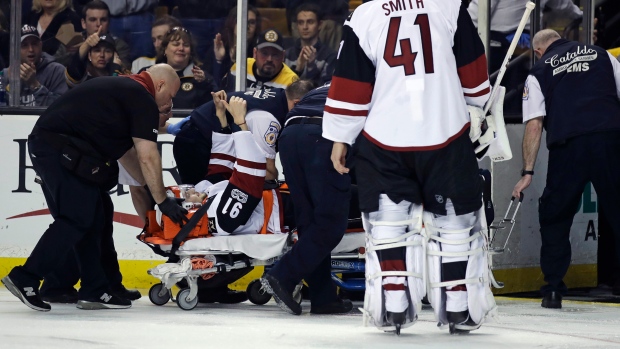 BOSTON — The Arizona Coyotes got word from the hospital after the second period that centre Alexander Burmistrov seemed to be doing OK.

By then, it was too late for them to get back into the game.

Riley Nash scored a short-handed goal after Colin Miller was ejected for a bone-rattling hit that sent Burmistrov off on a stretcher, and the Boston Bruins pulled away with a three-goal second period to beat the Coyotes 4-1 on Tuesday night.

"When it's as serious as that, it maybe takes a couple of minutes for everyone to get back to playing hockey," said Arizona goalie Mike Smith, who was pulled after allowing four goals on 14 shots and put the blame on himself.

"When the signal gets made, and the paramedics come on the ice, it's always hard to deal with," he said. "But that's no excuse."

Miller was given a five-minute major and game misconduct for knocking Burmistrov onto his back in the second period. The Coyotes centre remained motionless on the ice for several minutes but gave a thumbs-up with both hands as he was wheeled off on a stretcher.

The Coyotes said Burmistrov was taken to a hospital for further evaluation. He was treated, released and set to rejoin the team Tuesday night.

Captain Shane Doan said the team was told during the second break that Burmistrov seemed to pass the initial tests; it wasn't clear if he would have to remain in Boston overnight.

"Everything up until this point is great," Doan said. "Everything that you're really worried about seems to be OK."

Miller said he texted Burmistrov and explained he wasn't trying to hurt him.

"He said he understood," Miller said. "It's a hockey play."

With Miller in the dressing room and Boston a man down for three minutes, the Bruins scored three goals in the last 13 minutes of the second — including a pair jut 1:44 apart at the end of the period — to pull away.

"I don't know if that helped the team or not," Miller said. "But they did a great job killing it off."

Tuukka Rask had 22 saves for the Bruins, who have won six of seven games since firing coach Claude Julien and replacing him with Bruce Cassidy.

Louis Domingue stopped all 11 shots he faced after replacing Smith to start the third period.

Burmistrov, 25, is a 2010 first-round draft pick from Russia who has one goal and 10 assists this season. He had received a pass and just sent the puck along when Miller came into him sideways and knocked him down.

Burmistrov landed on his back and rolled partially onto his side, but otherwise did not move as first the Coyotes and then the Bruins medical staffs came out to tend to him.

Miller was immediately set upon by Arizona defenceman Jakob Chychrun, but the officials broke in before it could get too far.

"It's tough to see," said Chychrun, who added that he hadn't seen a replay and couldn't say whether he thought it was a dirty hit.

Miller was given five minutes for charging and thrown out of the game, and Chychrun was given two minutes for roughing. Nash broke a 1-1 tie about three minutes later, and David Backes and Brad Marchand added goals at the end of the second period.

Backes kept the puck in the zone, flipped it behind the net and then drifted over to the middle of the ice, where Marchand found him. A quick wrist shot beat Smith to make it 3-1 with just under two minutes left in the second.

Then, with just 11 seconds left in the period, Marchand intercepted a pass at the blue line and skated behind the net, leaving Smith spread-eagled and out of position. The Bruins forward came around the other side and slipped the puck behind the goalie to give Boston a 4-1 lead.

Miller had a goal in the first period for Boston. Peter Holland scored for Arizona 3:27 into the second period.

NOTES: The Bruins have scored first in their last six games. ... Arizona has lost the last nine games between the teams.