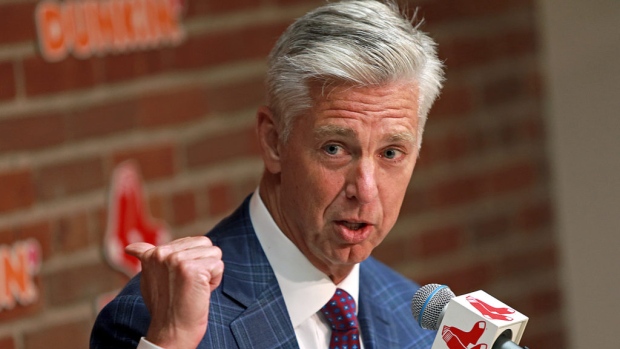 The firing of Dave Dombrowski came out of left field Sunday night when the Red Sox let their president of baseball operations go less than one year after winning the World Series.

The news broke late Sunday night but the team did not hold a press conference on Monday, instead releasing a statement that left many to wonder what really happened.

According to ESPN’s Buster Olney, the move wasn’t totally unexpected.

“The way it went down I think was a surprise where it was clear that something happened. I think a conversation during the course of Sunday night’s game between Dombrowski and my guess is John Henry, the principal owner of the Red Sox, went down,” Olney said Tuesday morning on TSN 1050’s First Up with Michael Landsberg and Carlo Colaiacovo.

“So to have the announcement come down at 12:07 a.m., yeah, that was a surprise. But yeah the fact that he got fired wasn’t really a surprise. I think he would have been fired if they had not beaten the Yankees in the division series last year. There was unrest within the organization. As Dan Shaughnessy of the Boston Globe first reported, he had kind of become an isolated figure within the organization. He didn’t have a lot of support there.”

Olney on Dombrowski firing, Blue Jays on pace for 100 losses and more

ESPN MLB Insider Buster Olney joins First Up with Michael and Carlo to discuss Dave Dombrowski being fired by the Red Sox a season after winning the World Series, the Blue Jays being on pace for 100 losses for the first time since 1979, if there is an MLB comparable to the NFL's Antonio Brown saga and more.

Dombrowski’s firing comes with the Red Sox entering play Tuesday trailing the Yankees by 18.5 games in the American League East, while projecting to miss the playoffs for the first time in four years.

Red Sox president and CEO said he and Dombrowski “enjoyed a tremendous partnership these past four seasons” in a statement released Monday, but Olney wonders if their relationship could have come into play in the decision to let him go.

“I think some of his inner-office relationships, you know Sam Kennedy is the president, he didn’t have a warm relationship with Sam who has a ton of influence in that organization. You know, some of the other people who had been in the baseball operations department left, like Mike Hazen, who is now doing a great job with the Arizona Diamondbacks and presumably will be one of the people that the Red Sox reach out to. I think the fact that those relationships did not develop well probably had a lot to do with [Dombrowski] being let go.”

Dombrowski was hired in August of 2015 with the team in the midst of their second consecutive last-place season. Outside of winning the World Series last October, the 63-year-old guided the Red Sox to LDS appearances in 2016 and 2017.

The Red Sox announced a search for the next baseball operations leader will begin immediately, with a committee of front office executives leading the way in the interim.