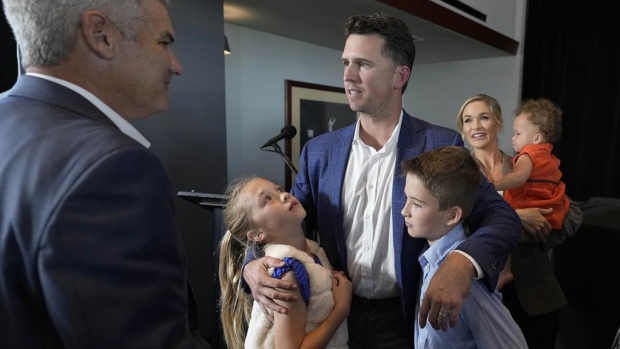 SAN FRANCISCO (AP) — Initially, as a young player more than a decade ago, Buster Posey had a tough time understanding how the San Francisco Giants strive to humanize their players, to connect them with a fan base that wants nothing more than to get to know the star athletes it supports.

He certainly gets it now. He appreciates his place in leaving lasting memories for families to cherish and pass down, and what he means to connecting a community — and even all those Bay Area dogs out there named Buster and Posey.

“It's probably something early in my career that I thought was a waste of time,” Posey shared. “And I didn't understand it. But as the years have passed I've realized just how impactful that can be. If it impacts one person in a positive way it's worth your time.”

The popular catcher offered a heartfelt goodbye to baseball on Thursday following a decorated 12-year career with the Giants during which he won three World Series championships and guided a long list of star pitchers, but also an equally impressive career off the field such as his tireless commitment to pediatric cancer and helping others.

“I’m sure there are kids out there today who have watched me play my entire career. They actually might be adults now,” Posey said. “There’s parents and there’s grandparents, aunts and uncles, nieces and nephews, cousins that can still remember exactly where they were when Edgar Renteria hit the game-winning homer in Texas that led the 2010 San Francisco Giants to their first World Series title."

Part of the reason he is walking away at 34 after one of his best seasons yet is to spend more time with his four children. And no doubt he will be busy. Posey opted out of the coronavirus-shortened 2020 season after he and wife Kristen adopted prematurely born baby girls to join older twins Addison and Lee.

"I want to be able to do more stuff from February to November with my family," he said.

The pull that way has been there a while now for the seven-time All-Star.

“I think the year off probably did play into the decision a little bit,” Posey said. “I didn’t approach the season and say this is definitely it. ... I can honestly say no, playing the way I did didn't sway me, and I think that's part of the reason that I do feel at peace with my decision.”

The Giants had been prepared to exercise Posey's $22 million club option for 2022 if he wanted to play, but he had an inkling before this record-setting, 107-win Giants season started this could be it.

“I kind of went into this last season feeling like it might be my last,” Posey said. “Just gave myself some space in my mind to be OK with deciding otherwise if I wanted to keep playing and I really just never wavered.”

Even after he batted .304 with 18 homers and 56 RBIs, resilient down the stretch as his body was feeling it though he showed his surgically repaired right hip had finally healed three years after surgery.

Posey said he easily could have called it a career five years ago and credited the training staff for keeping him on the field.

The 2010 NL Rookie of the Year, Posey came back from a devastating, season-ending leg injury in 2011 to win NL MVP the following year.

He tore three ligaments in his left ankle and broke a bone in his lower leg when he was run over by the Marlins’ Scott Cousins on May 25, 2011. Posey responded by winning the 2012 batting crown and MVP honors while leading the Giants to a second World Series championship in a three-year span. In all, he won World Series titles in 2010, ’12 and ’14.

Major League Baseball adopted a rule limiting home plate collisions ahead of the 2014 season after Posey's injury caused a reassessment.

“Buster, there's no better than him for me. I've been fortunate to have some great ones on both sides, as far as his gifts and talents and the person that he is, he's right up there at the top,” former Giants manager Bruce Bochy said.

“To me this is what encapsulates baseball. It’s a lot more than just winning or losing games,” he said. “It’s about the time spent with family, the countless nights and days pulling for your team, riding the emotions of the highs, riding the emotions of the lows, and ultimately enjoying the people that you’re with along the way and making great memories. I’m so very humbled to have played a part in some of those memories. To the fans, thank you for all your support I’ve received the last 13 seasons.”

“You were 60 feet from me in my greatest and worst moments in baseball. Your levelheaded approach to the game inspired me and every other player that set foot in those Giants locker rooms through the years," said Zito in a portion of his lengthy post. "I bet you had no idea.”

Now, the Giants must ponder life without Posey behind the plate.

“Is this like a definite, for sure thing?" president of baseball operations Farhan Zaidi quipped, "I just had to ask.”