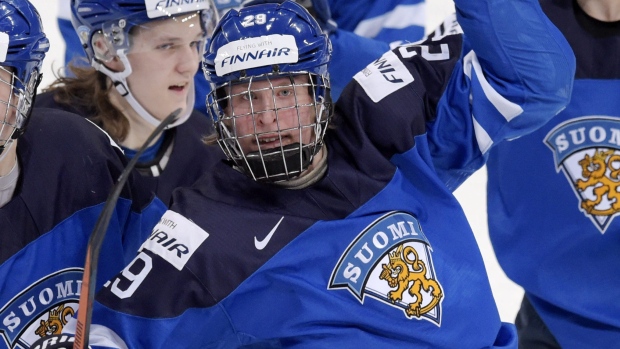 The American centre had topped draft lists all season long and his strong performance in Helsinki only cemented his status. But left winger Patrik Laine to Buffalo is a mild surprise considering most had right winger Jesse Puljujarvi as the consensus No. 2 pick entering the tournament and Puljujarvi is leading the World Juniors in points.

"There's no surprise with Auston Matthews, that elite, No. 1 centre," Button said. "At No. 2 is Patrick Laine. I want to see those magic hands of Laine with [Jack] Eichel. I want to see what kind of magic they can create."

That leaves Puljujarvi for Edmonton at No. 3 – one more addition to the Oilers' list of highly drafted forwards, including four former No. 1's: Taylor Hall, Ryan Nugent-Hopkins, Nail Yakupov and Connor McDavid.

The draft order was determined by team point percentages through Monday's games.

Some 26 years after the Winnipeg Jets drafted Keith Tkachuk with the 19th pick in the first round of the 1990 draft, Button has the franchise selecting his son, Matthew, fourth overall.
Vancouver follows with the fifth pick, taking Swedish left winger Alex Nylander, the son of former NHLer Michael Nylander and younger brother of Maple Leafs' prospect William.

"Alex is a really, really gifted player," Button said. "I love the way he uses his shot to set up the pass."

Speaking of the Leafs, Button has Finnish defenceman Olli Juolevi, who racked up nine assists in six games ahead of the final of the World Juniors, headed to Toronto with the seventh pick.

"He's a complete defenceman," Button said of Juolevi. "There's nowhere in the game he can't play."

Left wing Pierre-Luc Dubois of the Cape Breton Screaming Eagles of the QMJHL is projected in the eighth spot to Calgary.

Ottawa rounds out the Canadian lottery picks with centre Michael McLeod of the OHL's Mississauga Steelheads at the 13th pick.

"Michael McLeod is a very interesting player - he could go much higher than 13," Button said. "You talk to different people around the league, they love his competitiveness. He's an elite skater."

Button's mock also predicts a bit of entry draft history – a historic low for Canadian born-and-trained players. Jakob Chychrun, projected at the sixth pick to Carolina, is playing under Canadian flag but was born and trained in Boca Raton, Fla.

If the first round were to go as Button projects, with Julien Gauthier as the eighth pick to Philadelphia, it would be the lowest the first Canadian born-and-trained player has ever been selected in the 48-year history of the modern draft.