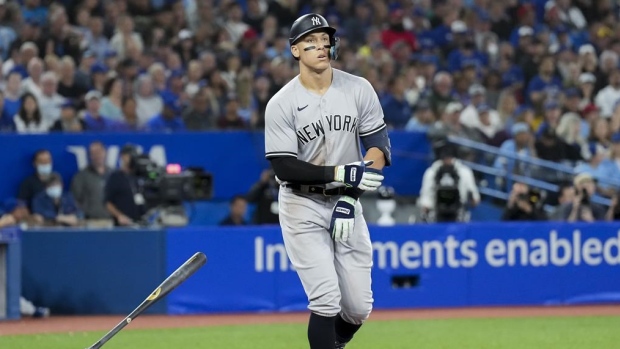 New York Yankees' slugger Aaron Judge hit his 60th home run of the season on September 20, leaving him one shy of tying the American League record for home runs in a season set by Roger Maris in 1961 - and has gone dry at the plate for seven days since.

Fans have been following the Yankees for a week now, anticipating the monumental home run as the team has played the lowly Pittsburgh Pirates and Boston Red Sox in New York, then the Blue Jays in Toronto.

Judge's seven straight games without a home run is tied for the second-longest drought this season; his longest was nine in August.

He has gone 31 straight plate appearances without a home run, though just 19 at-bats as teams are walking him very often recently (the Blue Jays have walked him six times in 10 plate appearances over two games).

In his current homerless drought, just 36% of pitches seen have been in the strike zone, compared to 47% throughout the entire season.

Of the seven instances of 61 or more home runs in a season, no other player has needed more than three games to go from homer No. 60 to 61.

Judge is set go again for the record-tying home run Wednesday on Wednesday with Mitch White scheduled to start for Toronto. Judge, who has not had a day off since September 19, is two-for-two against White in his career. White's home run percentage of 2.3 per cent falls under the Major League average.