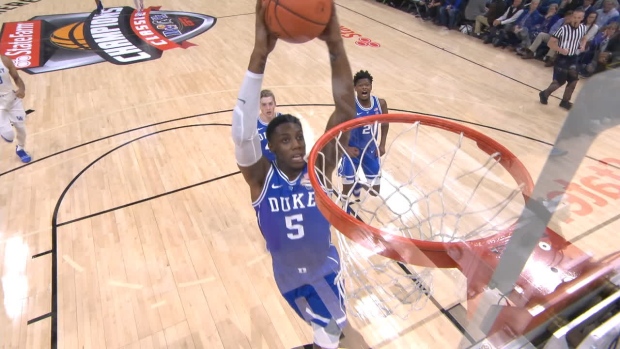 The NBA Draft goes Thursday night, with a crop of young Canadian talent looking to begin their careers.

There have been a number of solid Canadian NBA draft classes over the years, from three Canucks being drafted in 1983 all the way to having the first-overall pick in back-to-back years (2013, 2014).

But this year’s group of Canadian players has a chance to be a special one by setting both Canadian basketball and NBA Draft history.

France set a record for having the largest draft class for a non-American country in 2016 when they had five players selected.

While 2016 belonged to the French, it was Canada’s year in 2014 when the Canadian class, led by Andrew Wiggins, had four players selected – with three of them being taken in the top 18.

This year’s group of Canadians, headlined by Duke star RJ Barrett, has a chance to go above and beyond that number.

Of the 66 players invited to the Draft Combine, seven were Canadian.

Red and white first round?

Five of the seven Canadians invited to the combine crack the top 26 of ESPN’s Draft Rankings.

That gives Canada a chance to do what no non-American country has ever done and have five players selected in the first round.

That night in 2014 set a new high for Canadians in the draft breaking the previous high of three in 1983.

Barrett is no stranger to the limelight and he will once again be front and centre Thursday night as the projected No. 3 pick appears to be on a collision course with the New York Knicks.

If all things play out as expected, Barrett will be the highest selected Canadian player since Wiggins went first in 2014.

Ignas Brazdeikis (Michigan), and Oshae Brissett (Syracuse) both sit on the outside of ESPN’s top 60 and have the chance to be late second round picks.