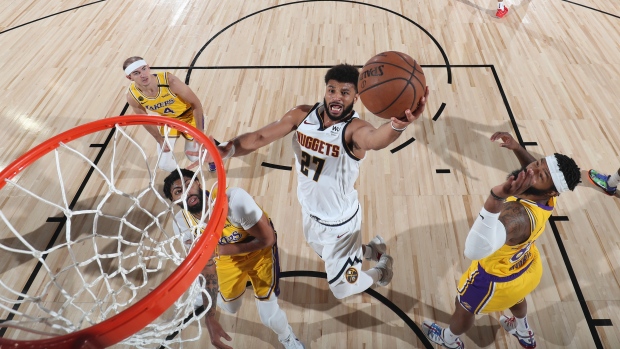 The whole season, it was supposed to come down to L.A. vs. L.A. in the Western Conference final. After an off-season of superstar additions for both sides, it only seemed right. When the Clippers led the Denver Nuggets 3-1 in the Western Conference semis and held a double-digit lead in Game 5, it looked like that was coming true. But Denver fought back and kept on fighting to somehow sneak past the Clippers and now sit just one series win away from the NBA Final.

Game 1 of the Western Conference Finals between the Lakers and the Nuggets gets underway Friday night and you can see it LIVE on TSN at 9 p.m. ET.

The obvious strength of these two teams is their superstar duos. According to ELIAS, it’s just the second playoff matchup ever featuring two players on each team who entered averaging at least 25 points per game in the playoffs. The other came in 1989 when Tom Chambers and Kevin Johnson of the Phoenix Suns went up against Chris Mullin and Mitch Richmond of the Golden State Warriors.

It’s been a wild ride to this point for the Nuggets, who became the first team in NBA history to win multiple series when trailing 3-1 in a single postseason. Much of that has to do with Canadian Jamal Murray, who is averaging 27.1 points per game on an absurd .595 adjusted field goal percentage and .491 mark from three-point land. All three figures as well above both his regular season and career average.

The Nuggets enter Friday’s matchup having been outscored in the playoffs (-21) and are only the 10th team to advance to the conference final despite a negative point differential. The previous nine lost, so Denver will have their work cut out for them to break that trend.

As for the head-to-head between these two teams, Los Angeles has just about every advantage. The Lakers have a playoff series record of 6-0 all time against Denver, which is the best series record by one team against another in NBA history. The Lakers won three of the four games between the two sides this season and the lone loss came without LeBron James.

Another big key for the Nuggets during their bubble run has been Nikola Jokic, though Anthony Davis has historically been able to handle him just fine. According to Second Spectrum, Davis averaged 40 points per 100 possessions against Jokic during the regular season, which was the most of any player who Jokic defended at least 30 times. It’s been a trend since Jokic entered the league in 2015. Among the 115 players that Jokic has defended 40 or more times, Davis averages 46.2 points per 100 possessions, the most of any player.