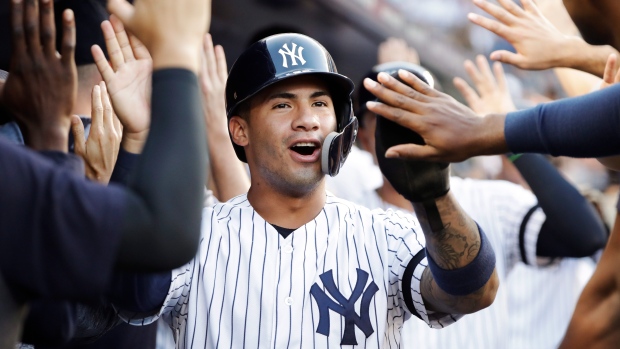 The Baltimore Orioles had to stop pitching to Gleyber Torres.

In the eighth inning of the second game of Monday’s doubleheader, the New York Yankees had two runners on base with two outs and a five-run lead. Up stepped Torres, who was already sitting on a total of three home runs and seven RBI on the day. Rather than face him with the game already out of hand, O’s manager Brandon Hyde called for an intentional walk to load the bases.

Based on the damage Torres has been doing to Baltimore all season, who could blame him?

The 22-year-old phenom has had a strong sophomore season for the first place Yankees, but against the Orioles he’s been historic. Thirteen of Torres’ 26 home runs this year have come against Baltimore, which is the most by a player against a single team in a season since Roger Maris (13) against the Chicago White Sox in 1961. Lou Gehrig holds the all-time record with 14 homers against the Cleveland Indians in 1936.

For context, Torres had three homers and 11 RBI in 11 games against the Orioles last season.

Single-season HR totals against one opponent

The Yankees play the Orioles two more times this week at Yankee Stadium to finish out their season series, so it’s conceivable Torres could tie – or break – Gehrig’s record of 14. Given his .364 average and 1.598 OPS over the last seven days, what’s another home run or two? Unless the Orioles keep walking him, of course.

Five of Torres’ six multi-home run games this year are against the Orioles, which is also a major league record for multi-homer games against a team in a season. He has eight career games with at least two home runs.

“I’ll take all the opportunities they give and then just do damage,” Torres told reporters after Monday’s twinbill.

“I just kind of had enough,” Hyde said of the decision to intentionally walk him Monday. We’re making him look like a first-ballot Hall of Famer.”

Torres has hurt the Orioles with more than just the long ball. Overall in 2019, the Venezuelan infielder is hitting .414 with 20 RBI and absurd OPS of 1.623 – by far his highest against any team.

The Baltimore pitching staff has allowed 248 home runs this year. They’ve already broken the single-season American League record of 242 and will soon eclipse the major league record of 258.

Torres isn’t the only athlete to have a division rival’s number. David Price is a career 23-3 against the Toronto Blue Jays with a 2.39 ERA and a miniscule .220 opponent’s batting average. For what it’s worth, he was pretty good when he pitched for the Blue Jays in 2015, too. Sidney Crosby has 36 goals and 113 points against the New York Islanders while leading the Penguins to a 40-17-9 head-to-head record. New England Patriots quarterback Tom Brady is 30-3 against the Buffalo Bills with a 64.1 per cent completion process and 99.3 passer rating.

All impressive, but maybe none as dominant as Torres has been against the Orioles this season.