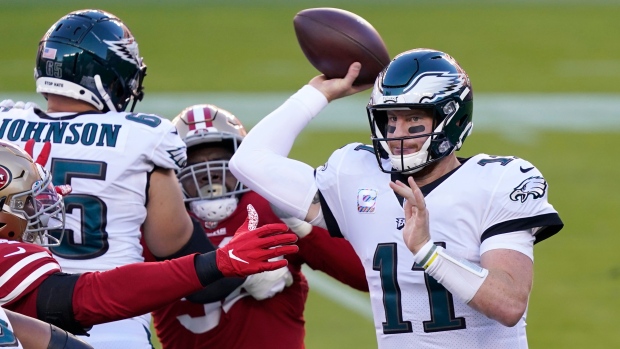 Watch the Philadelphia Eagles host the New York Giants on TSN 1/4/5, the TSN App, TSN.ca and TSN Direct at 9 p.m. ET/6 p.m. PT. Here is a statistical look at where things stand.

Six weeks into the 2020 NFL season, the NFC East Division has combined for a staggering 18 losses and one draw. Fortunately, both teams can't post losses as the New York Giants (1-5) take on the Philadelphia Eagles (1-4-1) in the latest installment of Thursday Night Football.

The Eagles had high expectations going into 2020, but an injury-riddled start and a tough schedule resulted in much of Philadelphia's malaise. Although the expectations were as high for the Giants, they were also bit by the injury bug while under new head coach Joe Judge.

This match is one of two all-NFC East matchups for Week 7. On Sunday, the division-leading Dallas Cowboys (2-4) take on the Washington Football Team (1-5),

All four NFL East teams have combined for a record of 5-18-1. A division with this record reignites the debate if the current playoff structure should be modified to not grant a division winner an automatic opening-round playoff game at home. Since 2002 — when the NFL went to a four-team divisional format — two teams won their division with a record under .500. The 2010 Seattle Seahawks were the first team to pull this off. They went 7-9 to capture the NFC West Division. The 2014 Carolina Panthers went 7-8-1 to win the NFC South Division.

The ESPN Football Power Index predicts the Eagles to win the NFC East with a 6-9-1, which would be the new worst record to advance to the NFL playoffs under the current format.

The Cowboys currently hold an NFL-worst -12 in turnover differential. At -7, the Eagles are tied for 30th in this category.

Eagles quarterback Carson Wentz has the second-most interceptions this season (9).

The Giants and Washington are tied for last in yards per game (275.3).

The lone bright spot for the division has been Cowboys QB Dak Prescott, who leads the league with 1,856 passing yards. However, he is out for the remainder of the season with an ankle injury.

Worst win pct. in a division through six games since 1970