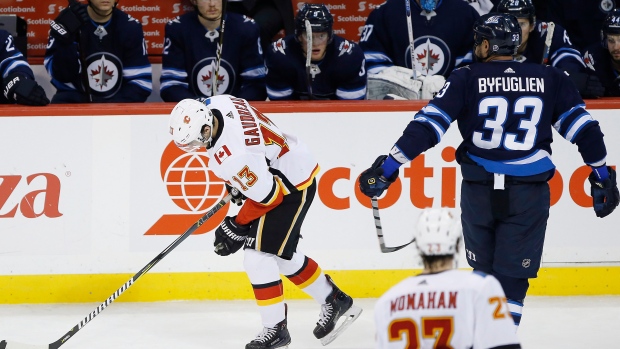 Gaudreau took a two-hand slash to the arm from Byfuglien on Thursday just before scoring an empty-net goal to complete his hat trick. Gaudreau left the ice in discomfort after the slash, but said he was fine.

"You know, it's part of hockey. I mean, it won't be the last time I'm slashed," Gaudreau said after the game. "Just kind of surprised. I had a foot or two on him, so I didn't think I was going to get a stick to the arm, but I found the empty net and that's the way it goes."

The Flames winger skated past Byfuglien at Calgary's blueline on the play, making his way towards the an empty net when Byfuglien spun and slashed Gaudreau on the left arm. Byfuglien received a two-minute penalty for slashing.

Gaudreau, who has 19 goals and 51 points in 38 games, has a history of being injured on slashes and broke a finger in 2016 after taking a stick to the hands. The NHL ramped up its calls on slashes to the hands ahead of last season.

Byfuglien, 33, has four goals and 28 points in 31 games this season with 52 penalty minutes.