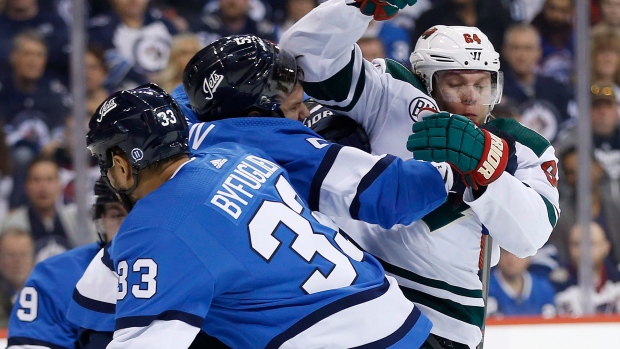 Winnipeg Jets defenceman Dustin Byfuglien left during the third period of Saturday's loss to the Minnesota Wild and did not return.

He had to be helped off the ice after Wild centre Luke Kunin made contact with him along the end boards. Minnesota went on to win the game 3-1.

Dustin Byfuglien needs help getting off the ice and can't appear to put any weight on his left leg.

Jets head coach Paul Maurice did not have an update on the defenceman following the game but hopes to have one Sunday.

Byfuglien collected an assist in the third period on Patrik Laine's goal which cut Minnesota's lead to 2-1, but the Jets couldn't tack on any more goals. Byfuglien had four goals and 24 assists in 31 games heading into Saturday's contest.

Winnipeg will be back in action Monday night against the Edmonton Oilers.