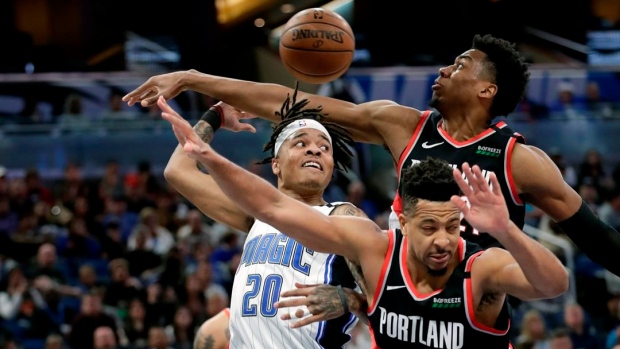 Hassan Whiteside had 16 points and 13 rebounds and Trevor Ariza scored 11 as the Blazers ended a 3-game losing streak by outscoring Orlando 38-19 in the final period.

Nikola Vucevic led Orlando with 30 points and 11 rebounds. Terrence Ross scored 23 points, but the Magic struggled offensively in the final period, hitting just six of 21 shots. The 130 points tied a season-high for points allowed by the Magic.

McCollum was the star for the first three quarters, but Trent, subbing for injured All-Star Damian Lillard, took over early the fourth and was the difference maker in the game. He scored 14 points in the quarter, 11 of them while McCollum was taking a much-deserved rest on the bench.

“I thought in both the first and second half, when CJ was out, Gary obviously did a really good job,” Portland coach Terry Stotts said. “I like the way we moved the ball. We had a lot of shot making. We just played a solid game from start to finish.”

Portland started the final period with an 92-88 lead, but Trent hit three straight jumpers to help kick Portland’s lead up to 103-94 when McCollum returned for the final eight minutes. Turns out, the Blazers didn’t much need him.

Ariza nailed a 3-pointer from the corner and turned it into a four-point play after being fouled. Trent followed with a 3-pointer and the Trail Blazers had a 114-99 lead to sit on for the final five minutes.

McCollum was almost a one-man show for the first three periods, hitting five 3-pointers and scoring 32 points despite constant attention from nearly every Magic defender on the floor.

The Magic cut an 11-point halftime deficit to 82-80 on a James Ennis layup with 4:14 left in the third when McColllum essentially went one-on-five against Orlando. The Blazers guard scored nine straight points for his team and made the pass out of a double team that led to a 3-pointer by Trent that gave Portland a 92-84 lead.

“That’s not surprising,” Trent Jr., said. “That’s what CJ does day in and day out so when he comes in the game and makes it look as effortless and flawless as he does, it’s no surprise.”

“That was incredibly disappointing,” Magic coach Steve Clifford said. “Tonight was again, lacklustredefence. If we think we are gonna outscore people and make the playoffs or be a factor, we don't understand who we are.”

Portland got a little bit of everything in the first half, especially from McCollum, who had 23 points at halftime. The Blazers’ guard hit 8 of 12 shots, including four of five 3-pointers, despite being the focus of constant double teams.

Orlando, in the bottom five in the NBA in 3-point shooting, stayed close thanks to a rare run of five straight 3-pointers to open the second period. Ross had three of the 3-pointers and a dunk and driving layup that pulled Orlando within 49-47 with seven minutes left in the half.

Trail Blazers: Lillard missed his sixth straight game with a groin injury. ... Portland had won seven straight against Orlando. ... McCollum is averaging 33.3 points and 8.3 assists in six games without Lillard.

Magic: F Aaron Gordon sat out the game with a sore knee. ... Orlando, near the bottom in scoring all season, is averaging 119.7 points per game in its last eight. ... Magic are (1-8) against the Northwest Division this season.

Magic: Travel to Miami on Wednesday.