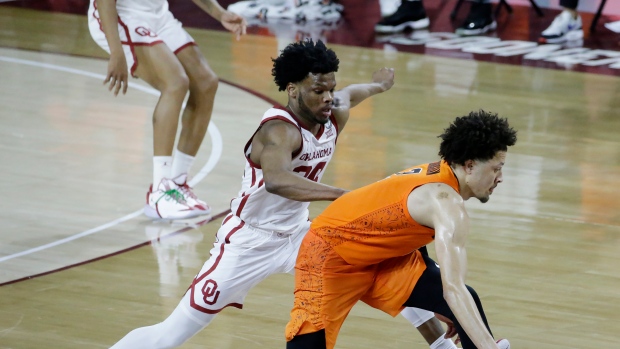 Cunningham's previous scoring high was 29 points. In his first Bedlam rivalry game, he made 12 of 21 field goals and 13 of 14 free throws. He also finished with 11 rebounds three steals and two blocks.

De'Vion Harmon matched a career high with 23 points and Austin Reaves had 22 points, eight assists and six rebounds for Oklahoma (15-7, 8-7), which was coming off an upset loss at Kansas State.

The two teams will meet again on Monday at Oklahoma State.

It was an intense back-and-forth game with plenty of hard, clean fouls.

Oklahoma, aided by an 11-0 run, led 38-31 at halftime. Harmon had 14 points at the break for Oklahoma while Cunningham had 13 for the Cowboys.

A 3-pointer by Harmon pushed the edge to 10 at the start of the second half before Oklahoma State surged. Williams hit a 3-pointer to cut Oklahoma's lead to 51-50, and Cunningham's deep 3 put the Cowboys ahead.

With Oklahoma State up by two, Reaves drove and found Brady Manek for the tying layup with seven seconds to play. Cunningham lost control of the ball while looking to create space for a game-winning shot, forcing overtime.

Oklahoma State: The Cowboys got a road win over a Top 10 team. The victory will vault the Cowboys into the Top 25 and likely improve their NCAA Tournament seed.

Oklahoma: The Sooners really need to win the rematch on Monday to avoid a tailspin. Even with the number of quality wins the Sooners have tallied, they can't afford too many losses this close to the NCAA Tournament selection process.

The rematch is Monday in Stillwater.