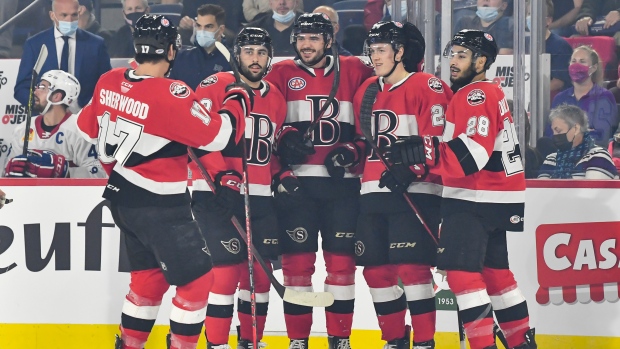 A year after the pandemic shut down the season, spring of 2021 arrived in places like Hershey, Pennsylvania, and Utica, New York, without the playoff hockey that usually followed.

The American Hockey League put on a shortened season to get through the pandemic, but the NHL’s top developmental league didn’t crown a champion for a second consecutive year.

After getting through another rough winter, the first full AHL postseason since 2019 is underway, with the Calder Cup set to be awarded in June — a major accomplishment and the start of what the league hopes will be a climb back toward pre-pandemic success.

“I’m really looking forward to handing that trophy out,” AHL president and CEO Scott Howson said. “I’m most excited for our players, who had it taken away from them when it hit in March in ’20 and then last year we were disappointed we couldn’t find a way to do it. Really excited for our players and our fans to get that excitement.”

It took adding six days to the schedule, but all 1,118 regular-season games were played after 78 virus-related postponements. The playoffs that began Monday and roll into their first full weekend feature 23 teams vying for the Calder Cup, which was awarded every year from 1937 until 2020.

There are nameplates for the previous 20 winning teams on the trophy, and with no offense to the 2000 Hartford WolfPack, it will be a welcome step to replace them with a new league champion.

It was no surprise when the rest of the season was called off two years ago. Unlike the NHL and other major professional sports leagues that could power through without crowds thanks to television rights deals and other financial advantages, the AHL couldn’t overcome the U.S.-Canada border closure and a tricky economic picture to bring all its divisions together for a proper postseason last year.

Instead, it got in 466 regular-season games between February and May 2021. NHL teams got to see prospects develop, but it felt empty without a trophy to play for.

“The reason why we play this game is because we want to win championships —- in every league — and when you don’t have that end game, sometimes you’re thinking, ‘Well, why are we playing?’” said Hershey Bears VP of hockey operations Bryan Helmer, an AHL Hall of Fame defenseman who won the Calder Cup three times. “Everyone’s going to be a professional and you’re going to play and talking with some of the players, it was like you’re basically playing for a paycheck.”

Now, Helmer’s Bears are playing to add to their league-record 11 championships. Kevin Dineen, who has coached the Utica Comets into the playoffs looking for their first title, remembers how big a deal it was when dad Bill won the Calder Cup twice in the 1980s. He sees more than just developmental value in the AHL playoffs.

“You talk to any coach and they might be fibbing to you when playoffs roll around and say your only focus is on development because I think we’re all competitive by nature and look forward to winning,” Dineen said. “Having that trophy and having that end goal is certainly a real carrot for players, management and organizations in general.”

The AHL playoffs have been a showcase for future NHL stars. Montreal goaltender Carey Price was playoff MVP when he backstopped the Hamilton Bulldogs to the title in 2007; Columbus defenseman Zach Werenski helped the Lake Erie Monsters win it all in 2016; and Stanley Cup champions Washington and Tampa Bay can trace several contributors back to Calder Cup runs.

Helmer compares the first round of the AHL playoffs to the regular season in the NHL and thinks players in the minors get a taste of what the NHL postseason is like by the time they reach the final. That kind of experience is hard to replicate.

“To develop your younger players, you want them to play in big, important games,” Helmer said. “You just look at the players that come through the American Hockey League going on to the NHL, there’s a lot of incredible players and staff and that sort of stuff. To accomplish your goal and what you wanted to achieve at the end of the season, to lift that Cup up, there’s no better feeling."

The worst feelings this season at the league office came from U.S. Thanksgiving through mid-January when teams reported multiple COVID-19 cases. Despite that stretch, which included some games being played in empty arenas and an near-total loss of group ticket sales, Howson said revenue is down only 10-12% from normal times.

The AHL was on pace to set financial records when Howson was chosen to succeed longtime president and CEO David Andrews in February 2020 before the pandemic hit, and with expansion to 32 teams on the horizon a return to that level is possible.

“It gives us a chance now to start building on what we were doing before,” Howson said. “It looks like we can start getting back on that track now.”