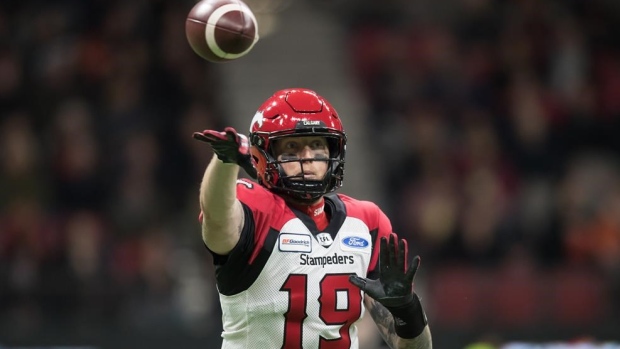 Bo Levi Mitchell and the Calgary Stampeders can extend their season Friday night while effectively putting an end to the B.C. Lions' 2021 campaign.

Calgary (6-6) visits B.C. (4-8) on Friday night needing a win to clinch a West Division playoff spot for the 16th straight season. A Stampeders' victory would also eliminate the Lions from post-season contention.

Mitchell and Co. have history on their side. Calgary has won nine of its last 11 meetings versus B.C., including a one-sided 39-10 decision in Vancouver on Oct. 16.

Calgary is 4-1 in its last five games while B.C. has lost its last six contests. The Stampeders are also coming off the bye week and are 14-2 since 2012 when doing so.

By comparison, B.C. starter Michael Reilly stands second in CFL passing (2,943 yards), has completed over 67 per cent of his passes with 11 TDs and eight interceptions. But Mitchell is a career 9-5 against Reilly and 2-1 with Reilly a member of the Lions.

The good news for Mitchell is receiver Reggie Begelton returns for Calgary. In 2019, Begelton had 102 catches for 1,444 yards and 10 TDs before joining the NFL's Green Bay Packers.

The Stampeders are 4-2 on the road and 4-4 within the West Division. B.C., on the other hand, is just 1-4 at home and 1-6 against divisional opponents.

At Toronto, the Argos (8-4) can clinch first in the East Division with a win or tie. They've won two straight and are 5-0 this season at BMO Field but starter MacLeod Bethel-Thompson has thrown eight interceptions and just two TD passes in his last three starts. He did register a season-high 388 yards in a 24-23 win over Hamilton (7-5) last month. The Ticats can cement the season series and a home playoff game with a fourth straight victory and take over first place heading into the final week of the regular season.

At Montreal, Trevor Harris makes a second straight start for the Alouettes (6-6) after completing 14-of-25 passes for 177 yards with two TDs and two interceptions in last week's 31-21 road loss to Winnipeg (11-1). The Als have clinched a playoff spot with but are still battling for a home post-season contest. The Bombers have already cemented top spot in the West Division and will start backup Sean McGuire at quarterback, giving CFL passing leader Zach Collaros some down time. But there's still the matter of that league-best defence, which registered three turnovers and four sacks last week.

At Regina, the Roughriders (8-4) can cement second in the West and a home playoff game with a win or tie or Calgary loss or tie versus B.C. Saskatchewan has won three straight but by a combined 10 points, including last week's 19-17 road victory over Edmonton (2-9). Cody Fajardo has thrown for 621 yards in the three wins with three TDs and two interceptions. The Elks have lost seven straight and will end their year with three road games, but consider they were 0-7 this year at Commonwealth Stadium. Rookie Taylor Cornelius had 322 passing yards and two touchdowns in last week's contest.

This report by The Canadian Press was first published Nov. 11, 2021.