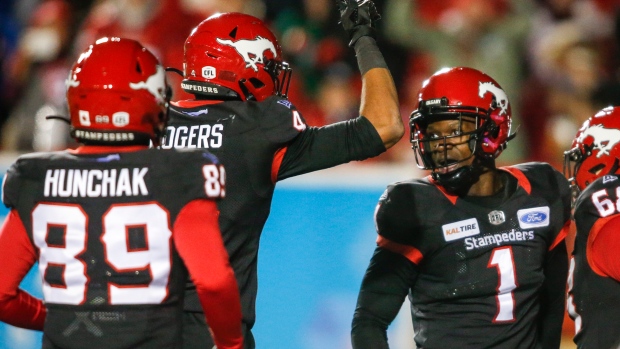 CALGARY — Hergy Mayala was happy that the majority of the 30,210 fans at McMahon Stadium were on his side on Friday night.

Although many of the fans were cheering for the visiting Saskatchewan Roughriders, Mayala definitely heard the support for the hometown Calgary Stampeders.

"It felt great," said Mayala, who scored his first two CFL touchdowns to lead the Stampeders to a 30-28 win over the Roughriders. "To me it was more the fans that kept us in it the whole time. Having more games like this will definitely feel great."

Mayala hauled in a pair of touchdown passes from quarterback Bo Levi Mitchell, while Jamari Gilbert had a fumble return and ran it back for his first CFL touchdown.

"Hergy definitely took a different step up this week and I think he's continued to do that every single week," said Mitchell, who completed 21-of-27 passes for 298 yards. "The more opportunity he's gotten, he's taken advantage of them, so it's fun to see. It's fun to be able to trust a guy and give him those plays."

Rene Parades kicked three field goals for the Stampeders (10-5), who moved into a tie with the Roughriders (10-5) atop the CFL's West Division standings.

"It was just a very hard-fought game that ended up a classic," said Calgary coach Dave Dickenson. "Each game's going to come down to the wire. I don't even remember the last game that I could breathe before winning."

The Stamps, who also beat the Riders 37-10 in Regina on July 6, hold the tiebreaker over their western rivals.

William Powell caught one touchdown pass from Saskatchewan quarterback Cody Fajardo and ran for another.

"That was a playoff atmosphere game," said Fajardo, who went 20-for-32 for 209 yards in the air while also carrying the ball 10 more times for 67 yards. "We just didn't play well enough. We left a lot of plays out there."

Nick Marshall had an interception return for a touchdown, while Brett Lauther kicked two field goals and Jon Ryan booted a single.

After Ryan opened the scoring with a 55-yard single, Parades kicked a 47-yard field goal to put the Stamps up 3-1.

On the ensuing kickoff, Saskatchewan returner Marcus Thigpen tried to pick up a bouncing ball, but it went off his hand and right to Gilbert, who scooped it up and ran 28 yards into the end zone for his first CFL touchdown at 6:05 of the first.

"That's a good team over there in Calgary and you're not going to be able to beat a good team when you make the mistakes we made," said Saskatchewan coach Craig Dickenson. "When we did make a mistake, it seemed like Calgary did a good job of making us pay."

The Riders answered right back 2:33 later when Marshall intercepted an errant pass by Mitchell and ran it back for a 62-yard touchdown.

Parades booted his second field goal of the game from 45 yards out late in the second half to give the home side a 13-8 lead.

Saskatchewan lined up for a field goal of their own in the second quarter, but pulled off a trick play instead as back-up quarterback Bryan Bennett quickly lined up under centre and then ran for six yards and a first down. The risk paid off as Powell ran for a three-yard TD a short time later to cap off a 15-play, 91-yard scoring drive to give the visitors a 15-13 lead.

Undeterred, Mitchell responded by engineering a five-play, 78-yard drive of his own that he finished off by tossing an eight-yard strike in the end zone to Mayala for his first CFL touchdown to put Calgary up 20-15.

"Getting it out of the way was definitely a great feeling," said Mayala, who finished with five catches for 70 yards. "The first one is definitely the one that I'll remember the most."

Lauther kicked a 12-yard field goal as time expired in the first half to pull the Riders within two points.

Mayala hauled in an 18-yard TD pass from Mitchell at 9:26 of the third quarter to cap off a nine-play, 75-yard scoring drive.

Lauther attempted a 48-yard field goal late in the third, but the ball hit the right upright and bounced back onto the field.

After Lauther connected on 42-yard field goal in the fourth quarter, Parades responded right back with one from 41 yards out.

Fajardo then led the Riders on a six-play, 75-yard drive that culminated with him throwing a 34-yard TD pass to Powell with 2:19 left to play in the game.

Instead of trying an on-side kick, Lauther kicked the ball deep into Calgary territory in hopes of getting the Riders another chance on offence, but the Stamps were able to kill the remaining time on the clock.

This report by The Canadian Press was originally published Oct. 11, 2019.