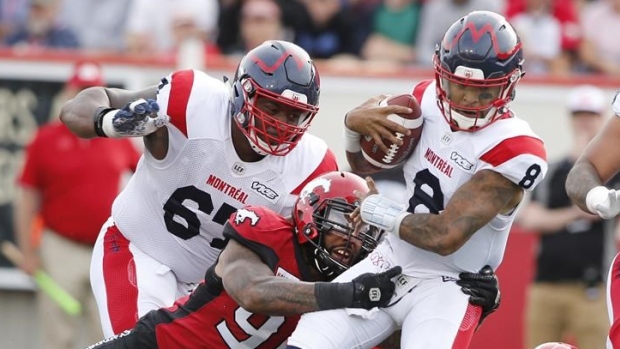 MONTREAL — While there's no love lost between the Montreal Alouettes and Calgary Stampeders, neither team is looking for a repeat of last game's fireworks.

A heated contest between Montreal and Calgary in mid-August started with a pre-game brawl and ended in a come-from-behind, overtime victory by the Alouettes.

That wild finish — and the bad blood between both teams — is still fresh on everyone's minds as the Als (7-6) prepare to host the Stamps (9-4) on Saturday.

"There's always going to be a little talking back and forth, but we're going to make sure that our guys aren't into anything extracurricular. We'll let our play speak for itself."

Before that Aug. 17 encounter even started, the pre-game warmup turned into a full skirmish when Montreal cornerback Tommie Campbell traded punches with former Stampeder teammate Wynton McManis. Players from both teams converged on midfield and more punches were thrown.

There were no suspensions following the fight, but three players were fined.

"We want to play with poise and we want to make sure not to get in altercations especially before a game, or during a game," Stamps coach Dave Dickenson told the team's website this week. "That's not football to me. I don't think I really need to address a lot of it."

Montreal went on to win 40-34 in overtime following an improbable fourth-quarter comeback. Down 11 points with 45 seconds to play, the Alouettes scored a touchdown and two-point conversion, then recovered the onside kick and booted a last-second field goal.

It was Montreal's first win at McMahon Stadium since 2009.

"I'm sure they're watching the film to know what happened and the mistakes they feel they made, and what plays we made," said Jones of Saturday's opposition. "Our guys have the knowledge that we can beat this team and we have to play really good football to do it."

Since that loss, the defending Grey Cup champions have won four straight games and clinched a post-season berth. Calgary sits atop the West Division, tied with the Saskatchewan Roughriders (9-4) and a half-game ahead of the Winnipeg Blue Bombers (9-5).

Montreal is also getting its starting QB back this week. Vernon Adams Jr. returns after serving a one-game suspension for a "dangerous and reckless act." The CFL suspended Adams for swinging a helmet at Winnipeg linebacker Adam Bighill on Sept. 21.

The Alouettes quarterback was forced to watch from the sidelines as Montreal lost 25-23 to the B.C. Lions last week after a fumbled third-and-short late in the fourth quarter.

"It was really difficult not to be on the field with my guys," said Adams, who had two passing and two rushing touchdowns against the Stamps in August. "But this week I'm back and I'm glad to be back. I'm just trying to help lead and do whatever I can to bring a win to the home crowd."

Montreal would clinch its first playoff spot since 2014 with a win or tie against the Stampeders. A post-season berth and home playoff game is all but guaranteed for the Alouettes, who will likely finish second in the East Division behind the Hamilton Tiger-Cats.

"This city is buying into it," said Adams, who is tied for second in the league with 15 passing TDs. "They have nothing but good things to say after our games. Even when we lose in those tight ones, they're still saying how much better we look from previous years. It shows how much we want to win for this city and this organization."

QUEBEC CURSE?: The Stampeders have only won once at Molson Stadium since 2013 (1-4 record). That lone victory was in 2018 when Calgary defeated Montreal 12-6.

PLAYOFF PICTURE: The only way Montreal would fail to make the playoffs this year is by losing its last five games, and if Ottawa or Toronto win all their remaining games.

STANBACK ON A ROLL: Alouettes running back William Stanback looks to continue his breakout season. The 25-year-old CFL sophomore has rushed for 895 yards and five touchdowns.