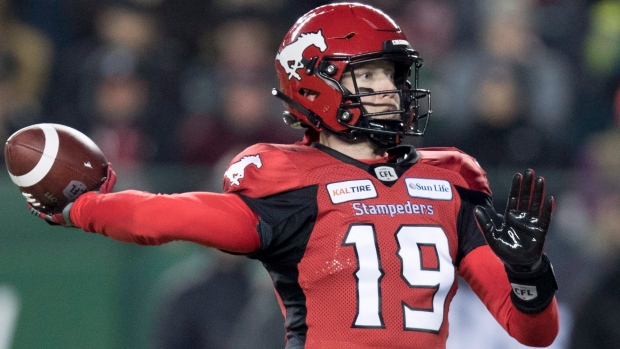 Bo Levi Mitchell has been a thorn in the side of the Winnipeg Blue Bombers.

The Calgary Stampeders quarterback sports an 11-2 career record versus Winnipeg, his latest win being a 37-33 home decision over the Blue Bombers on Saturday night. The two teams complete their home-and-home series Friday night at IG Field.

The Bombers aren't alone. Mitchell boasts a stellar 76-17-2 regular-season record as Calgary's starter and twice has been named the league's most outstanding player (2016, '18).

The 29-year-old native of Katy, Texas has also led Calgary to two Grey Cup titles (2014, '18), securing MVP honours in both contests. He has passed for over 4,000 yards during his career against Winnipeg, boasting a 67.6 per-cent completion average with 26 touchdowns against nine interceptions.

Last week, Mitchell completed 22-of-33 passes for 337 yards with three touchdowns and one interception to improve his record this season to 7-2 as Calgary's starter. All three of his scoring strikes were to Reggie Begelton, who moved into a tie with B.C.'s Bryan Burnham and Hamilton's Brandon Banks for the league lead (10 TDs apiece).

Calgary (11-5) can clinch a home playoff game with a win or tie against Winnipeg (10-7). The Stampeders would also secure first place in the West Division with a victory and Saskatchewan (11-5) losing to Edmonton (8-8) on Saturday.

Winnipeg needs to win to remain in the hunt for a home playoff game. Both Calgary and Saskatchewan have a game in hand on the Bombers.

Winnipeg opened the season with five straight wins and appeared on cruise control atop the West Division with a 7-2 record. But then starter Matt Nichols suffered a season-ending shoulder injury and the Bombers have gone just 3-5 since.

Backup Chris Streveler has proven to be a much more effective runner than passer, having cracked the 200-yard passing plateau just twice since assuming the starting duties. Streveler has run for 550 yards on 88 carries (6.25-yard average) and seven TDs over that span.

However, he's gone four games without a rushing TD. And there's some question whether Streveler (ankle) will play Friday.

Regardless of who starts, Calgary's defence will present a big challenge as the unit is ranked second behind Winnipeg (45) in forced turnovers with 42. But what makes that stat even more impressive is the Stampeders have scored a CFL-high 113 points off turnovers this season, 14 more than the second-place Bombers.

Then again, there's something about playing at IG Field that definitely agrees with Winnipeg, which is 7-1 at home this season. And the Bombers are a solid 6-3 within the West Division.

But Calgary counters with a 4-3 road record and 7-1 West Division record. And then there's the matter of Mitchell, who always seems to give the Stampeders a solid chance for the win.

At Montreal, the question remains how long will both teams play their starters having already clinched playoff berths. Hamilton (13-3) has won four straight as Dane Evans had a career-best 452 passing yards last week versus Ottawa. The Alouettes (9-7) held on for a 27-24 home win over Toronto as Vernon Adams Jr. threw three TD passes and ran for 44 yards on seven carries. The home team has won the previous two matchups this season. Hamilton will finish first in the East and the Als are locked into second.

At Toronto, the Argonauts (3-13) look to sweep the three-game season series with Ottawa (3-13). Starter McLeod Bethel-Thompson has led his squad to both previous victories. He threw for 342 yards and two TDs against Montreal last week. Rookie Will Arndt is 45-of-72 passing (62.5 per cent) for 200 yards with two TDs and three interceptions in two straight starts for the Redblacks, who've lost nine in a row.

At Edmonton, quarterback Cody Fajardo leads Saskatchewan (11-5) after signing a two-year contract extension Monday. He remains the CFL's feel-good story and has been a pivotal figure for a club contending for first in the West. The Riders can clinch a home playoff game with a win or Winnipeg loss or tie versus Calgary. The Eskimos (8-8) activated starting quarterback Trevor Harris (upper body) from the six-game injured list but won't finish higher than fourth in the standings.

This report by The Canadian Press was first published Oct, 16, 2019.