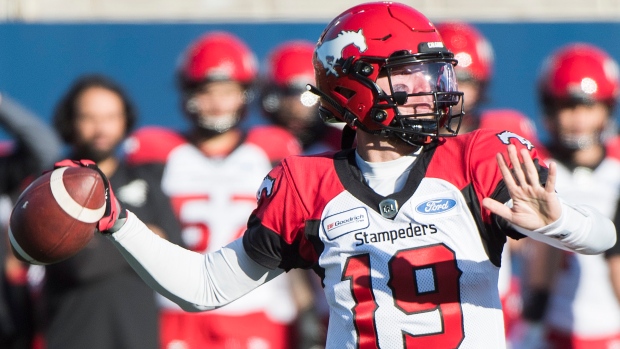 The CFL playoff picture is clearing up.

The Edmonton Eskimos (8-8) cemented the final post-season berth with their 19-6 home win over the B.C. Lions (5-11) on Saturday. And with the Winnipeg Blue Bombers' 35-24 home victory over the Montreal Alouettes (8-7) on Saturday, Hamilton (12-3) locked up top spot in the East Division standings and home-field advantage for the conference final.

Montreal will finish second in the East and have home-field advantage for the conference semifinal versus the fourth-place finisher in the West Division. B.C., the Toronto Argonauts (3-12) and Ottawa Redblacks (3-12) have all been eliminated from post-season contention.

But there's still plenty to be decided, including top spot in the West Division standings. Calgary, Saskatchewan and Winnipeg all have 10 wins apiece, although the Blue Bombers have played one more regular-season game than the Stamps and Riders.

What's more, Winnipeg (10-6) will finish its regular season with a home-and-home series versus Calgary (10-5), starting Saturday at McMahon Stadium.

Another important contest is Saskatchewan (10-5) visiting B.C. After this game, the Riders will finish up with a home-and-home series against Edmonton, which is on a bye this week.

After the home-and-home with Winnipeg, Calgary will finish its regular season visiting B.C.

On Saturday night, Calgary's run defence will be put the test against Winnipeg. The Bombers ran for 240 yards on 34 carries in their victory over Montreal, averaging a stellar 7.1 yards per attempt.

Andrew Harris had 166 rushing yards on 24 carries — both season highs — to boost his season-leading total to 1,261 yards. Offensively, Winnipeg is averaging a CFL-best 148.9 yards rushing per game, which is good considering the Bombers boast the league's worst aerial game (215.4 yards).

Backup quarterback Chris Streveler has thrown almost twice as many interceptions (12) as TDs (seven) but has rushed for 641 yards on 112 carries (5.7-yard average) with 12 TDs.

Calgary counters with a defence allowing just 90.8 yards rushing per game, second only to Winnipeg (67.4 yards). But the Stamps are surrendering 4.6 yards per carry, tops in the CFL, and 19.3 offensive points per game, second-best overall.

The Stampeders are also coming off a 30-28 home win over Saskatchewan on Friday night. Quarterback Bo Levi Mitchell led the way with 298 yards passing with two TDs and an interceptions for the defending Grey Cup champions.

Rookie Hergy Mayala had five catches for 70 yards and was on the receiving end of both of Mitchell's touchdown tosses.

Calgary boasts a 6-2 record at McMahon Stadium and is 6-1 within the West Division this season. Ironically, the Stampeders' lone loss to a conference rival was a 26-24 road decision to the Bombers on Aug. 8.

But a lot has changed since then. Matt Nichols was still Winnipeg's starting quarterback and Nick Arbuckle was under centre for Calgary with Mitchell on the injured list.

While the Bombers are 6-2 within the West Division this season, they're also 3-5 on the road.

At Vancouver, the Lions will be minus starting quarterback Mike Reilly, who suffered a season-ending wrist injury against Edmonton. Danny O'Brien was 12-of-23 passing for 103 yards and an interception replacing Reilly. Cody Fajardo finished 20-of-32 passing for 209 yards with an TD and interception versus Calgary while rushing for 67 yards. With a win, the Riders would sweep their three-game series with B.C. this season.

At Hamilton, the Ticats return from their bye week having already clinched top spot in the East and sporting a 7-0 record this season at Tim Hortons Field. Quarterback Dane Evans is expected to see plenty of action as he completes his first season as the starter. Will Arndt was 28-of-42 passing for 288 yards for Ottawa against Toronto last week in his first CFL start. The Redblacks come in having lost eight straight games.

This report by The Canadian Press was first published Oct, 16, 2019.