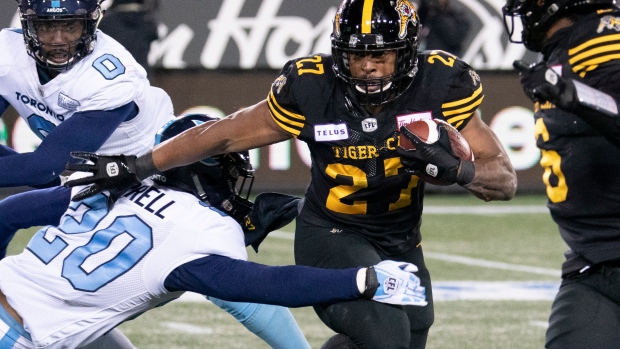 Marshall recorded 18 carries for a game-high 109 yards and two touchdowns, while adding 24 receiving yards, as Hamilton defeated Toronto 21-18 on Saturday.

The Tiger-Cats, who have a bye to the East final, finished the regular season with a perfect 9-0 home record and increased its franchise-best single-season win total to 15.

Leonard had a team-high six tackles, including three tackles for a loss, two sacks, a forced fumble and a fumble recovery, to lead the Saskatchewan defence in a 23-13 win over Edmonton on Saturday.

The victory earned the Roughriders the West Division crown and a bye into the West final.

Lalama had a personal-best 11 tackles and his first career sack as Montreal beat Ottawa 42-32 Friday.