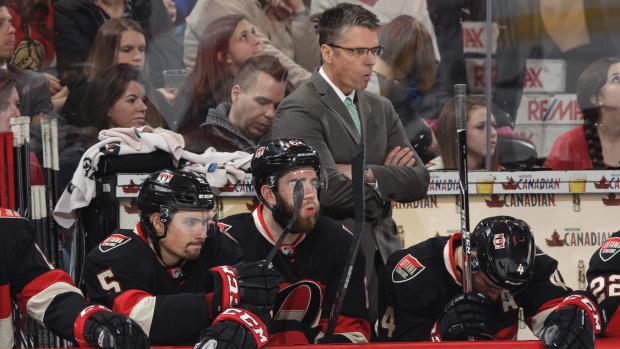 Dave Cameron says he needs another night to sleep on the most important coaching decision of his NHL career to date.

“I haven’t made up my mind yet,” Cameron told reporters on Saturday afternoon at the Canadian Tire Centre in Ottawa when asked about his starting goaltender for Game 3 against the Montreal Canadiens on Sunday night.

Cameron has skillfully navigated around the landmines of a goalie controversy in a market that is all too familiar with the subject.  This situation could have erupted into an awkward mess, but instead has stayed largely dormant thanks to the steady hand of the head coach.

Ever since Andrew Hammond returned from an injured back at the end of March and pronounced himself fit to play, Cameron has tabbed him as the starter. And the 27-year-old netminder rewarded him with a 6-0-1 record in the final seven games of the regular season to secure the most unlikely playoff spot in league history. His final regular season numbers were borderline ridiculous: a 20-1-2 record to go along with a 1.79 GAA and a .941 save percentage. There was no question that Hammond - even though he was far less experienced than the incumbent No. 1 goalie Craig Anderson - was going to get the nod to start the series against the Canadiens.

But Hammond has looked vulnerable in the first two games in the post-season, allowing seven goals in a pair of losses to the Canadiens. Hammond has been peppered with 81 shots in the first two games and while he has a respectable .914 save percentage - there are many who feel like Hammond should have stopped at least four or five of the goals that he has allowed. In fact, you can put Hammond down in that camp as well.

“I think I’m a lot like the team - we haven’t played a full 60 minutes. And if you look at my game a little closer, maybe you could say the same about myself. Because there has been a little bit of - I guess brain farts there - and pucks have found their way in that maybe I should have,” admitted Hammond on Saturday. “But it’s tough to say because you face 42 shots and you feel like you played pretty good, you make some good saves and then those are the ones that go in. It hurts a little bit.”

Complicating matters is the fact that Craig Anderson is such an intriguing alternative to Hammond. On one hand, Anderson was the dominant goalie who keyed the Senators five-game victory over these same Montreal Canadiens in the 2013 playoffs. He allowed just nine goals during the series and sported a sparkling .950 save percentage. However, Anderson struggled down the stretch this season - battling a hand injury and inconsistent play - that ultimately opened the door for Hammond to seize the No. 1 job. Anderson has not played since a 4-2 loss to the Florida Panthers on March 29th - meaning he would have to shake off the rust of three weeks of inactivity if he was named the Game 3 starter.

In speaking to reporters a couple of days ago in Montreal, Anderson said that Hammond deserved the chance to start the series against Montreal, but he was trying to stay prepared in case he was called upon.

“For myself, my goal is just to be healthy and be ready. And if the opportunity arises for me to go in there, that I got to go in there and do a job. And that’s my mindset right now,” Anderson said on Wednesday morning at the Bell Centre. “Just be there for the guys and make sure I’m ready in case something happens.”

There have likely been some spirited internal discussions with the Senators brain trust - including Cameron, goalie coach Rick Wamsley and general manager Bryan Murray - on how to proceed from here with the goaltending. With the team trailing 2-0 in the series, there is little margin for error at this point. “What do you think goes into the decision?” Cameron shot back when asked about his thought process for choosing a Game 3 goalie. “What gives me the best chance to win goes into every decision I make.”

Ironically, in the last home game the Senators played at Canadian Tire Centre, Cameron chose to stick with Hammond - despite a terrible start to a hockey game against the Pittsburgh Penguins on April 7. The netminder allowed three goals in the first period of the game and the Sens quickly found themselves down 3-0 in a crucial contest against the Penguins. But instead of pulling Hammond in favour of Anderson, Cameron stuck with him and his faith was rewarded when Hammond didn’t allow another goal and the Senators rallied back for an impressive and memorable 4-3 overtime win against Pittsburgh.

But now Cameron has to ask himself if he still has the same faith in Hammond as he did two weeks ago - or whether it’s time to go back to Craig Anderson.