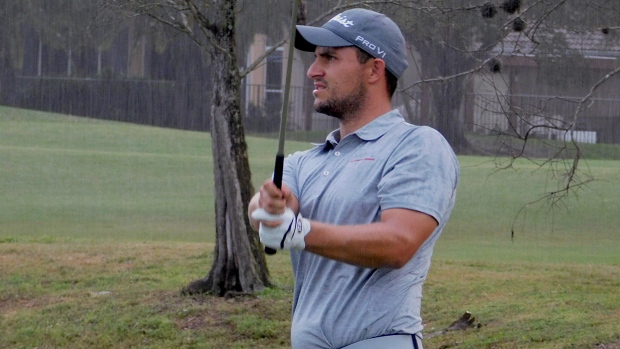 WESTON, Florida—It was a tough call to know if Camilo Aguado was more pleased with his 5-under 67 Wednesday or the fact he finished his round as the sun was quickly setting. On one hand, his score gave him a commanding lead through 36 holes at the Mackenzie Tour’s Qualifying Tournament here at The Club at Weston Hills’ Players Course.

However—and this should not be discounted—by finishing his second round, Aguado gets to sleep in Thursday morning. A 1-hour, 40-minute rain delay prevented the entire field from finishing their second rounds, so 24 players will return to complete their rounds Thursday. Jeremy Gandon also has completed 36 holes, and the Frenchman by way of Kansas State University, is alone in second place, five shots behind Aguado. Of those who finished play, Americans Erik Flores and Jason Thresher are at 8-under and seven strokes behind Aguado.

“I want to win. It’s been a long time since I’ve had my last win,” Aguado explained after his round that ended with more rain falling. “I really want to shoot my lowest four-day tournament, and that’s going to be the plan [Thursday]. I’m going to try to make as many birdies as I can and see what happens.”

Aguado, a regular on PGA TOUR Latinoamérica in both 2019 and again in this 2020-21 wraparound season, is hoping to increase his playing opportunities by spending his summer in Canada. He has put himself in prime position through 36 holes by making 14 birdies, one eagle and only one bogey.

Aguado had played nine holes of his second round when officials blew the horn as the course became unplayable due to heavy rain. Aguado returned after the stoppage and promptly made three consecutive birdies before his lone bogey of the week, at No. 4 (his 13th hole of the afternoon). He parred in, a 67 following his opening 62.

“Obviously [Tuesday] was really good. Today, I tried to do it again, but it became a little harder with the rain, obviously,” said Aguado, a native of Colombia who played collegiate golf at Jacksonville State in Alabama. “When we came back, the greens were really slow, and it was hard to get the ball to the hole. The breaks changed, so it was a different course than [Tuesday].”

Gandon is currently the only player within shouting distance of Aguado, and at that he still has a lot of ground to make up.

On the ninth tee, his 18th hole of the day, Gandon trailed Aguado by four shots with the sun quickly setting. He put his ball on green on the par-4 in regulation but faced a 45-foot uphill putt for birdie. With the rain coming down and darkness descending, he left his first putt nine feet short and then missed his putt for par.

“They definitely slowed down a little,” Gandon said of the Players Course greens. “The fairways were definitely soft after all the rain. I had a couple of mud balls out there, but it’s part of the deal, and everybody is playing the same course.”

This 72-hole tournament has no cut. The resumption of the second round begins at 9 a.m., with officials regrouping players for the third round.

Did you know the last tournament Camilo Aguado won came in his native Colombia in 2019? Played at La Sabana Country Club in Tocancipá, Aguado won the National Professional Championship, an event featuring Colombia’s second-largest purse. Aguado shot rounds of 67-69-67-68 to finish at 13-under, one shot ahead of Diego Vanegas. It was Aguado’s second professional victory, coming a year after he won a 2018 Mexican Tour tournament.