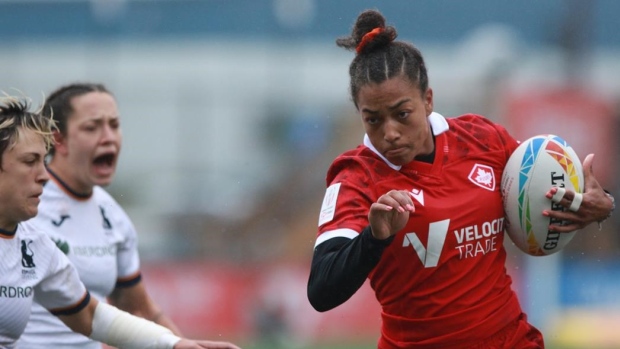 LANGFORD, B.C. — The weather co-operated for Canada’s critical matchup against World No. 1-ranked Australia on Saturday evening. The competition was a little more stingy.

Having played a near-perfect first half, Canada surrendered a try in the dying seconds of their HSBC Canada Sevens rugby tournament matchup, falling behind 7-0 at the break and eventually succumbing 28-5 to the top-rated team in the world.

Charlotte Caslick took the steam out of the crowd of 2,485 at Starlight Stadium with the late try and took the air out of what was a gutsy performance, to that point, by Canada. The Wallabies opened it up in the second half and ran away with the victory to finish pool play a perfect 3-0.

“Sevens is all about possession and we started the second half by not being able to secure the kickoff and it became quicksand, a domino effect. But honestly, the grit and determination … we played against this exact same Australian side in Dubai at the start of our season. We didn’t touch the ball and we lost by 50 points.

“That was a game today. They know that and we know that, but we were second best. There’s no doubt about it, but the gap is closing.”

Unfortunately, it will not get any easier in the quarterfinals as Canada, which finished pool play at 2-1, faces defending Olympic champion New Zealand Sunday at 10:22 a.m. PT. Australia, meanwhile, tackles Spain at 11:06 a.m., after France plays Fiji at 10 a.m. and Ireland faces the United States at 10:46 a.m.

“Tomorrow (Sunday) we have to get up again for playing against one of the best teams in the world,” said Hanratty. “But that’s what we want.”

Canada had the exact start it was looking for earlier in the day in wet, misty, cool conditions that later opened to sunny skies against Australia. The hosts downed Spain 19-10 and solidified a spot in the quarterfinals with a 43-0 wash of Mexico.

After more than a two-year absence from its home base at Starlight Stadium, due to the COVID-19 pandemic restrictions, Canada looked a little nervous to start. It led 7-5 at the half against Spain as Keyara Wardley recorded the home side’s first try in the first four minutes. Captain Breanne Nicholas added her first of two conversions.

Marla Calvo responded immediately for Spain and the opponents then struck for their first lead of the game with a try from Lea Ducher following the halftime break of the quick 14-minute affair to assume a 10-7 lead.

Veteran Bianca Farella put Canada up for good on a brilliant run from midfield after dummying a pass out wide and cutting inside for the lengthy score. Nicholas converted for the 14-10 lead and Canada never looked back. Wardley added her second try with under two minutes remaining to clinch the victory.

“A bit nervy,” Hanratty said of the start. “For us we wanted to make sure we were comfortable in chaos and there was a lot of chaos today with the rain and everything. Then those six minutes of the second half we looked very comfortable.

“There were a few nerves at the start, and I think that was just having a crowd again. The hairs were going on my arms and the back of my neck, so I can’t imagine how the players were feeling,” he added, summing up the day as “two highs and one low.”

Canada then dominated from start to finish over Mexico to set up the match Coach Hanratty wanted to see as a test for his younger team.

University of Victoria product Krissy Scurfield, an under-ager at 18, led the way against Mexico with a pair of tries for Canada. Farella, Fancy Chavez, Renee Gonzalez, Elissa Alarie and Florence Symonds added one try apiece. Olivia Apps added three converts and Asia Hogan-Rochester added the other conversion in front of a boisterous crowd.

Against Australia, it was a match for the first 6:59 of the game, but it turned quickly. Demi Hayes added a try in the first minute of the second half and Maddison Levi added two more Aussie tries in the 10th and 11th minutes. Olivia De Couvreur recorded Canada’s only try in the dying seconds of play.

Dominique Du Toit had three converts for Australia and Sharni Williams added the other.

“I feel like every single opponent we come up against is a challenge. There are no easy games in sevens,” said De Couvreur, who had a smile as wide as the field as she out-paced an Aussie opponent to the touch line. “We came into it with a fresh face and fresh mindset and gave it our all. We’re walking away with a smile on our faces and head into Day 2 very positive.”

It will take a dynamic performance against New Zealand, but the powerful Black Ferns are not talking Canada lightly.