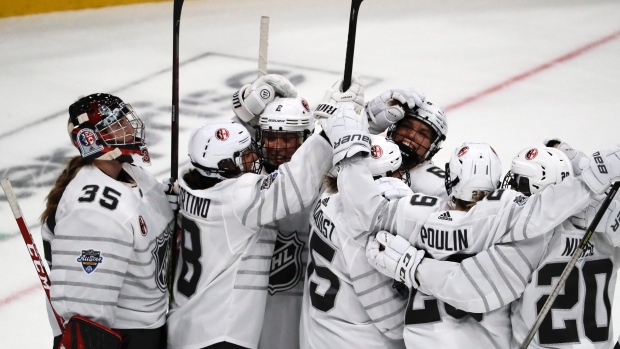 ST. LOUIS — Sarah Nurse took a few seconds to soak it all in.

The pride of Burlington, Ont., was sitting on the ice at Enterprise Center, watching as her teammate Marie-Philip Poulin beat some of the NHL’s best in the Shooting Stars contest - launching pucks at targets 145-feet away while wearing a pair of sparkling flats.

Nurse had just helped Canada knock off the rival United States, 2-1, in the first-ever Women’s Elite 3-on-3 contest at the NHL Skills Competition.

But it was rubbing elbows with the other NHL All-Stars, talking hockey and laughing on the ice, that gave Nurse pause.

“It was pretty cool because it was like we were standing with the best men’s hockey players in the world, and you have the best female hockey players standing there, too,” Nurse said. “All of us on the same ice? I don’t think that’s ever happened before.

“That was a pretty surreal moment. It’s something I don’t think I’ll ever forget.”

Think about that for one second.

For the first time ever, a group of women got to put on a jersey with an NHL crest. That crest served as a symbolic reminder of how far the women’s game has come - and how far it still has to go in their fight for more support, potentially from the NHL, and better infrastructure.

But for 20 minutes, women’s hockey was front and centre at the NHL’s All-Star Friday night, the biggest platform yet for a sport that is too often only remembered every four years. There were 18,069 fans ‘oohing’ and ‘ahhing’ women’s hockey in an NHL rink with thousands of little girls watching on television at home.

“It’s something that you dream about - the day that there’s routinely that many people watching women’s hockey in a sold out building,” Coyne Schofield said. “For us to have that 3-on-3 alongside the NHL’s best is just incredible.”

The women wanted to put on a show and they did not disappoint. This wasn’t a lackadaisical All-Star performance for a change.

Coyne Schofield said the intensity level was “one notch” below an Olympic gold medal game. That’s how much it meant.

“That was a Canada-USA rivalry,” Nurse said. “There was a lot of pride on the line.”

On Friday, there was the Elite Women’s 3-on-3 - with two Hall of Famers on the benches in Cammi Granato and Jayna Hefford and four female officials on the ice with NHL-level experience.

“To be part of the NHL All-Star weekend was really special,” Granato said. “There is a big hockey audience that watched this event and being included was a huge platform for the women’s game.”

The pressing question now is: What’s next?

How can the women’s game ride the momentum of the All-Star platform and the groundswell of support? The best players in the game are grinding it out on the Dream Gap Tour now in rinks around the continent.

“I hope that we can continue it,” Nurse said. “We’ve gained a lot of momentum while we’ve been here.”

Many are looking toward the NHL to take the next step, to get involved in the creation of a sustainable professional operation with liveable wage salaries.

The NHL has increased its support, but commissioner Gary Bettman has been consistent in saying that he does not envision the league stepping in while another league is functioning, as the fledgling NWHL is now. The NHL doesn’t want to get in the way.

Bettman said “we’ll see” on Friday when asked about that next step before the Skills Competition.

“Let’s see how it goes tonight,” Bettman said. “I met with the players on both teams about an hour ago and we had a good chat. They’re excited to be here. We’re excited to have them. And the fact that we can shine, using our light, a brighter light on the women’s game I think is a positive for them, for the game, and for young girls watching and aspiring to do the same thing.”

What Nurse learned in talking to her NHL cohorts on the ice on Friday night is that they have support from the best male hockey players on the planet.

“They were awesome,” Nurse said. “They really support our cause. They were curious to see what’s going on and they want to know how they can help and what they can do to promote the game.”

That meant as much as anything.

“We’ve been out of sight and out of mind,” Nurse said.

As they saluted the crowd on their way off the ice, those 20 women knew they succeeded in pushing the puck just a little bit further forward in their fight.

“I think every time we’ve come, we’ve proven ourselves,” Coyne Schofield said. “It showed how great of hockey players we are. You could see the skill, the puck movement, the speed. For the NHL to allow us to have this platform to play the game in front of so many people, it really shows the strides this game is making.”