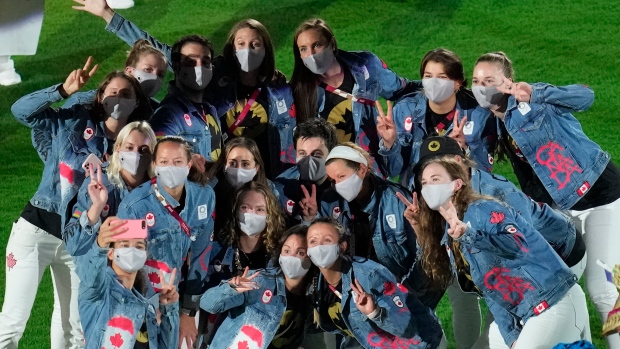 Canadian athletes at the closing ceremony , The Canadian Press

Most Canadian athletes headed to Beijing weren't yet born the last time a Winter and Summer Olympics were held within months of each other.

After the Winter Games in Albertville, France and Summer Games in Barcelona in 1992, the International Olympic Committee began alternating the properties every two years.

Tokyo's 2020 Summer Games put off to 2021 because of the COVID-19 pandemic has another Olympic Games starting less than six months after Tokyo's closing ceremonies Aug. 8.

"It was definitely a weird feeling to be watching and thinking 'I could be doing this in six months,'" said alpine skier Brodie Seger of Whistler, B.C.

"Normally, it's not that close."

Beijing's opening ceremonies are Feb. 4, but competition starts two days before that with mixed curling, women's hockey and moguls qualification.

Canada's winter Olympians were emotionally invested in Tokyo for several reasons, not the least of which was a Summer Games crossing the finish line in a pandemic indicated a Winter Games could too.

"Seeing the Summer Games go made us believe the Winter Games are probably on as well," said world champion speedskater Laurent Dubreuil of Lévis, Que.

Canada's winter and summer athletes routinely cross paths in the seven national sport institutes across the country, and particularly in the hubs of Vancouver, Calgary, Toronto and Montreal.

"You feel that pride that they have, you feel every emotion they go through because you've been there and you know how much work they put in," Poulin said.

The summer athletes were the first to test on an Olympic stage how well they managed the stresses, pivots and adaptations through lockdowns and competition cancellations, as well as the life disruption of quadrennial extended to a quinquennial.

Canada's 24 medals in Tokyo's Olympics was the most at a non-boycotted Summer Games, with seven gold the most since Barcelona three decades ago.

The emotional slingshot effect on Canada's winter athletes hasn't had time to dissipate as it might have if Tokyo's Olympics were in 2020.

"Looking at the Tokyo Olympics and how well our athletes did throughout those games, it's inspirational for us going into Beijing," Ottawa speedskater Ivanie Blondin said.

"For them, it was one year delayed, but for us, it being so close, the motivation and the inspiration we get from that being so close to our Olympics kind of follows through a little more."

"I've always been a big track and field fan," Kripps said. "Watching Andre de Grasse do his thing really just lit a fire under me."

"I really loved watching Steph Labbé as the goalkeeper not just in the final game, but throughout the whole tournament," Beatty said.

"I just love how on the goal line when she's about to get a penalty kick kicked at her, she's there smiling.

"It's such a good embodiment of sport and finding ways to embrace what sport is to you and be happy in the moment of what you're doing."

"It was extremely fun to wake up in the morning and watch an event or two and then going to the gym," Kingsbury said.

"A lot of cool stories and a lot of moments where I was 'ahhh, I can't wait to compete.'"

For Paralympic cross-country ski champion Brian McKeever of Canmore, Alta., it was Qatar's Mutaz Essa Barshim and Italy's Gianmarco Tamberi agreeing to tie for gold in high jump and share the title.

"They're best friends, they train together and compete together and they're from different nations," McKeever said. "I think that was a really cool story.

"I get to do that every Games. I share the medal with my guides."

"I see myself a little bit in him," she said. "I have the chills just talking about it now because it's so inspirational.

"I want to recreate moments like that for our Canadians at home that will be watching."

The Canadian women's hockey team was all about their soccer counterparts winning gold in Tokyo.

In Calgary to start their centralization period for Beijing, the hockey players were up early in their hotel's meal room transfixed by victory via penalty kicks in the final.

"That was just before we headed into our world championship," said forward Sarah Fillier of Georgetown, Ont.

"I think it definitely lit a fire under us and we came out and won that world championship. I think it was really big and added some momentum to our game."