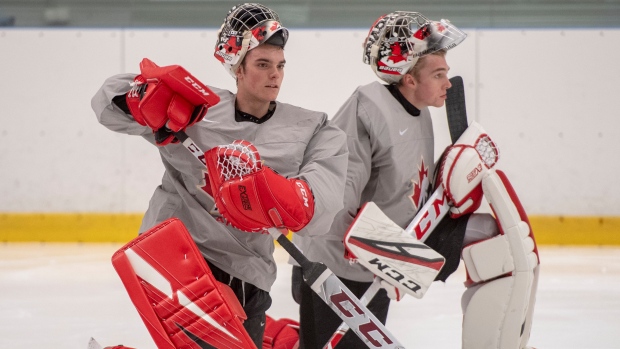 OSTRAVA, Czech Republic — The puck ricocheted off Nico Daws’ shoulder, straight into the air, and that’s when the panic set in.

“I’m sitting in my net praying, praying that it was going over [the net],” Daws said Sunday. “I’m like ‘Oh god, here we go.’ I try to get back and I catch my blade. It was just unlucky all around.”

It bounced off of Daws and into the net, prompting the playing of that authentically Russian goal song, digging a hole for Canada less than two minutes into Saturday night’s contest.

It was Daws’ admitted response to that bad break that really summed up all of the fears about Team Canada’s goaltending at this World Junior Championship.

“It was just an unlucky bounce and I let it get in my head a little too much,” Daws said. “It’s something I can fix easily … we can talk it out and figure out how to keep our emotions in check in a game like that. I’m usually pretty good with it, but it’s tough with a big crowd and an environment like that. I’ll get on top of that and be better.”

The question now is whether Daws will get another chance to right his wrong.

Dale Hunter and Team Canada’s coaching staff have held the starting goaltender card close to their vest - and Monday’s starter against Germany was no exception.

After Daws (four goals against) and Joel Hofer (two goals against) combined to allow the most lopsided loss in the country’s history at the World Juniors, all options are on the table.

There was a noticeable change in practice on Sunday with third goaltender Olivier Rodrigue significantly increasing his workload in the rotation.

Assistant coach Andre Tourigny confirmed that Rodrigue, the Edmonton Oilers’ second-round pick in 2018, may be part of the solution now.

“We’ve talked about maybe six million scenarios,” Tourigny said. “I won’t go into all of those with you guys [the media]. But we said it from the beginning, we have a lot of confidence in our three goalies.”

The case could be made for any one of the three goaltenders to start.

Daws, 19, seems to be Hunter’s guy. He started the final pre-tournament game against Switzerland, then both of Canada’s first two games of the tournament itself.

But with a shaky .840 save percentage (42 saves on 50 shots), Daws has struggled in the spotlight.

Facing Germany would mean a little more for Daws. He was born in Germany and raised in Burlington, Ont. He holds dual citizenship. After not being on Team Canada’s radar last season as a backup for the OHL’s Guelph Storm, Daws said his agent even contacted the German national program to see if they had interest in him joining them for the World Junior Championship.

“I didn’t even get a look from them coming into the summer,” Daws said. “So obviously every game is a big game, but that game would be a little bit personal for me.”

Hofer, 19, mopped up for Daws on Saturday against Russia after the fourth goal. His numbers were better than Daws, allowing two goals on 22 shots (.909 save percentage) but he didn’t exactly provide a spark for Canada.

Hofer hasn’t played a full game since Dec. 8 with the WHL’s Portland Winterhawks. It’s been slightly longer (Dec. 7) for Rodrigue, who hadn’t even seen any pre-tournament action for Team Canada.

However, Rodrigue has the international pedigree that both Daws and Hofer lack. His transition to the starting role on Monday wouldn’t come across as a desperate move with Canada’s skaters in front of him because they have already won with Rodrigue.

Rodrigue led 10 of these same players to a gold medal for Team Canada at the 2018 Hlinka / Gretzky Cup. They know him. They trust him.

“I’m always ready if they need me,” Rodrigue said after Sunday’s practice. “If they call my name, I’ll be ready.”

Will we see a change?

Tourigny was quick to caution that he didn’t think Russia’s blowout was the fault of either Daws or Hofer.

“Actually, we don’t think our goalies played bad,” Tourigny said. “We just think we gave up way too many scoring chances in the first two games. Our first period has to be better. That’s not just on the goalie, it’s on everybody.”

Daws admitted that Saturday’s loss to the Russians was humbling. Canada’s players said they sensed an air of overconfidence, thinking they would waltz to a win.

“Maybe overconfidence, maybe just being a little too comfortable, not really knowing what to expect from other teams,” Daws said. “You see the Czech Republic beat Russia and you’re kind of wondering like ‘Are they that good?’ … We weren’t ready for it.”

Whoever is in net for Team Canada will need to be better. Every single time Canada has won gold overseas, their starter has been the best goalie in the tournament.

“Welcome to the World Juniors,” Tourigny said. “Now we know where we stand.”