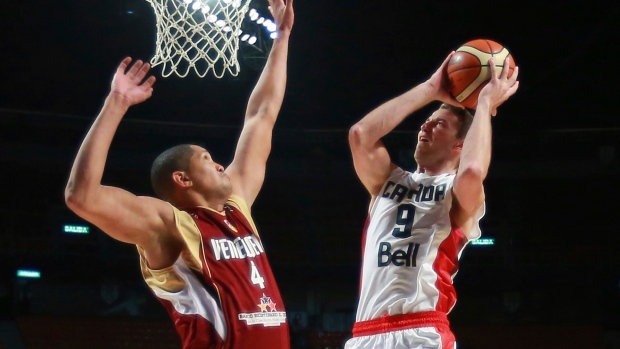 MEXICO CITY - Canada's men's basketball team is doing all it can to live up to expectations.

Nik Stauskas had a team-high 16 points as Canada earned its second straight victory at the FIBA Americas championship, downing Venezuela 82-62 on Thursday.

"When we can stop teams like that, we hope to just keep running and pushing the ball up the floor," said head coach Jay Triano.

"We have a target, people think we're one of the better teams here and if we play well we could be."

All five of Canada's starters finished in double digits. Kelly Olynyk dropped 14 points, Andrew Wiggins had 13 while Cory Joseph and Anthony Bennett each had 10.

Dwight Lewis led Venezuela (2-1) with a game-high 17 points and Nestor Colmenares chipped in with 16.

Canada's Dwight Powell left the game in the first half after landing awkwardly on the floor. His status post-game was unknown, but he did return to the team bench for the second half.

The Canadians (2-1), who are looking to finish in the top two in Mexico to qualify for the 2016 Rio Olympics, jumped out to a 25-15 advantage after the first quarter and increased it to 47-28 by halftime.

Venezuela chipped into the lead, outscoring Canada 20-17 in the third, but couldn't overcome a 16-point deficit to open the final quarter en route to its first loss of the tournament.

"I think we did better today, especially on the defensive end," said Joseph, whose squad outrebounded its opponent 52-33. "I thought our defence started a lot for our offence."

Canada already qualified for the second round with its victory over Cuba on Wednesday, and wraps up the first phase of round-robin action on Friday against Puerto Rico (1-2).

Earlier in the day, Toronto Raptors off-season acquisition Luis Scola had 11 points and eight rebounds as Argentina downed Cuba 96-64 to stay atop the Group B standings with a 3-0 record. Jasiel Rivero scored a game-high 28 points for Cuba, which fell to 0-4.