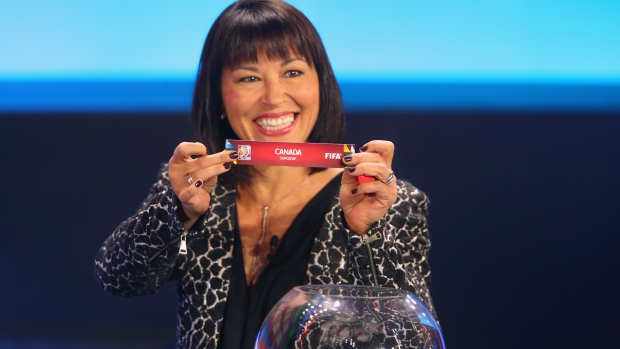 Opening the competition on June 6 in Edmonton against China, Canada also plays New Zealand in Edmonton on June 11. They will finish group play June 15 in Montreal against the Netherlands.

The World Cup Draw, held in Gatineau, Que. placed the 24 qualified teams for the tournament in six groups of four.

The Canadian team sits eighth in the world in the FIFA rankings. The team qualified automatically for the tournament as hosts and famously won Olympic bronze in their last competition: the 2012 London Games. Canada has undertaken a difficult schedule of friendlies in 2014, however, playing four of the top five teams in the most recent FIFA rankings.

The results were mixed, but largely encouraging: earning a 1-1 draw with the top-ranked Americans in May, and a win and a draw against fifth-ranked Sweden in Los Angeles in late November. They were bested in both games they played against No. 3 Japan in October, losing 3-0 in Edmonton and 3-2 in Vancouver. They were also beat 2-1 by No. 2 Germany in June.

China were one of the first teams to qualify for the World Cup, advancing to the Asian Cup semifinal on May 17. They gave the defending World Cup Champions from Japan a scare in the semifinal, losing 1-0 after extra time. The team did not qualify for the 2011 World Cup in Germany after having qualified for the previous five tournaments.

Once a world power, China were runners-up to the United States at the 1999 tournament, losing on Brandi Chastain's iconic penalty kick. The nation has twice hosted the World Cup, first the inaugural tournament in 1991 and later in 2007. They have advanced to the knockout stage in four of their five appearances, losing in the quarter-finals three of four times.

The Netherlands were the second-last team to qualify for the World Cup, securing their berth on Nov. 27 in the UEFA qualification play-off. They finished second to Norway in their qualification group, but the 25 points they secured through 10 games, earned them a chance to secure the lone spot available to a European runner-up via playoffs. The Dutch team beat Scotland 4-1 on aggregate in the semifinal before going on to top Italy 3-2 to earn a trip to Canada.

This marks the first trip to the Women's World Cup for the Dutch, whose best international result to date was a third-place finish at the 2009 European Championship.

The "Group of Death" was handed to the defending Olympic gold medalists from the United States in Group D. The top-ranked Americans were handed Sweden (fifth in the world), Australia (10th) and African champions Nigeria (35th). Winnipeg will play host to the first four Group D games with USA-Nigeria taking place in Vancouver and Australia-Sweden in Edmonton to wrap up the round.

Japan was handed a relatively easy group, drawing 18th-ranked Switzerland, 51s-ranked Cameroon and 49th-ranked Ecuador. Group C will be based in Vancouver before a third games in Winnipeg and Edmonton.

Germany drew stiff competition for the top of their group with former Champions Norway, but also have 30th-ranked Thailand and 64th-ranked Ivory Coast alongside. The Ivorians are the lowest-ranked team to qualify for the tournament. Group B will play in Ottawa before moving to Winnipeg and Moncton for their opening round finales.

Group E sees sixth-ranked Brazil alongside Spain (16), Korea Republic (17) and Costa Rica (40) in Montreal before a move to Moncton and Ottawa.

See the related links in this article for the full tournament schedule. The full groups listing can be seen below: