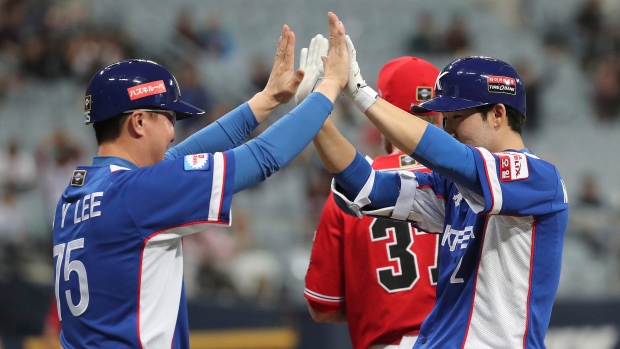 SEOUL, Korea, Republic Of — The Canadian men's baseball team dropped to 1-1 at the Premier 12 Olympic qualifier with a 3-1 loss against host South Korea on Thursday.

Canada, ranked 10th in the world, is now tied for second in Group C with No. 5 Cuba. The third-ranked Koreans lead at 2-0.

Canada plays its final first-round game on Friday (Thursday night at 10 p.m. ET) against No. 7 Australia (0-2).

The top two teams advance to the Super Round in Tokyo.

Canada cut Korea's lead to 2-1 in the eighth on an RBI double by Wes Darvill before the hosts added an insurance run in the ninth.

"We faced a very good (pitching) staff over there with Korea, they threw the ball extremely well," Canada manager Ernie Whitt said. "I'm proud of our guys, they hung in there to the end.

"But give credit to Korea, they pitched (well) and played good defence."

Chris Leroux replaced him with runners on first and second and one out in the sixth.

"He ran out of gas," Whitt said of his starter. "He probably threw 10 more pitches than we wanted him to and his pitch count was up so I had to remove him from the game."

Leroux got the first batter he faced to pop out before loading the bases on a walk.

Jaehwan Kim then lined a single to right to give Korea a 2-0 lead.

Canada will send right-hander Brock Dykxhoorn to the mound to face Australia.

The Australians have won their last four international meetings against Canada.

Canada will need to finish as the top team from the Americas region — which also includes the U.S., Mexico, the Dominican Republic, Venezuela and Cuba — to secure an Olympic berth.

Another qualifier, featuring just teams from the Americas, will be played in March for a second spot in the six-team Olympic tournament in Tokyo next summer.

This report by The Canadian Press was first published Nov. 7, 2019