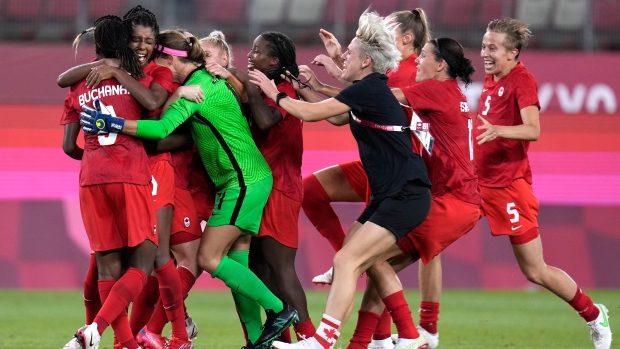 The demons of the 2012 Olympics have been exorcised.

In an historic moment, Canada’s women’s soccer team defeated the top-ranked Americans 1-0 in the semifinal of the Tokyo Olympics on Monday.

The Canadians will now have a chance to win their first-ever major tournament in the gold-medal match on Thursday.

“We were clear that we definitely wanted to change the colour of the medal, and we knew that was a massive, massive task,” said head coach Bev Priestman. “We’re going into this final to absolutely get a gold medal.”

Jessie Fleming scored on a penalty kick in the 75th minute to seal the win.

It was a massive victory for the Canadian women, ranked eighth in the world, in numerous ways. This was their first win over their rivals in 20 years, dating back to Mar. 11, 2001. It ended a 36-game streak of American domination.

This was also just Canada’s fourth-ever win against the United States in 62 all-time meetings, but none have come close to the importance of Monday’s victory.

"I don’t necessarily feel like Canada has caught up [to the United States]. I think we’ve always been there. We just needed the mindset to be right,” said Priestman.

It’s also the first time the team has advanced to the final of a major tournament. Canada will now face Sweden for a chance at gold and will reach the podium for a third straight Olympics after earning back-to-back bronze medals in 2012 and 2016.

“We’ve come this far,” said Priestman. “I think the group won’t go out into that final just happy to be there and go home with silver.”

Much of the discussion entering Monday’s semifinal was focused on the last time the two teams met in the Olympics in the semifinals of the 2012 London Games. Christine Sinclair scored an unforgettable hat trick, but it was ultimately undone by some controversial refereeing and a late winner in extra time by American forward Alex Morgan.

Midfielder Desiree Scott was part of that 2012 team. In a fitting moment, Sinclair gave the captain’s armband to Scott, her long-time teammate, after being subbed out of Monday’s game in the 87th minute.

Goalkeeper Erin McLeod and midfielder Sophie Schmidt, who are both on the current Olympic roster but were not named to the bench for Monday’s game, were also there in 2012.

“There are some veterans on the team that still feel that hurt from 2012,” said Priestman. “I’m just over the moon for the group of players to get that.”

After the final whistle blew and the Canadian celebrations had largely moved into the locker room, Sinclair could be seen sitting by herself on the pitch. Schmidt approached her, and Sinclair looked at her teammate of nearly 15 years, almost in disbelief as a smile came across her face.

“Someone like Christine now gets to go to an Olympic final, who’s done so much for the program,” said Priestman.

The immensity of the moment can’t be understated for the Canadian captain. Although she didn’t have the impact on Monday’s match that she did in 2012, she is still the heart of the team and a legend within the game.

Sinclair holds the all-time international goals record with 187, including 12 in the Olympics. She has won championships at the college and club level, but never on the international stage.

In 2019, Sinclair told TSN that she was “sick of bronze medals.” Now, she will add a gold or silver to her illustrious career.

The turning moment of the game came in the 72nd minute. Canadian substitute Deanne Rose used her speed to chase down a loose ball in the American 18-yard box. Centre-back Tierna Davidson did not see Rose approaching on her left, and Rose ended up going down after the two came together.

As Adrianna Franch – who was called into action after starting goalkeeper Alyssa Naeher left with an injury in the 30th minute – prepared to take the goal kick, the referee signaled for a VAR check for a possible penalty. Upon review, the ref determined that Davidson committed a foul on Rose in the area and awarded Canada a penalty kick.

It initially looked like Sinclair would take the penalty as she picked up the ball. Janine Beckie had taken the last two penalties for Canada at major tournaments and had failed to score both times (earlier in these Olympics against Chile and in the round of 16 match versus Sweden at the 2019 FIFA Women’s World Cup).

But instead, Sinclair handed the ball to 23-year-old Fleming. Sinclair and Franch are teammates on the Portland Thorns in the NWSL, which may have played a part in the decision. Symbolically, it was a passing of the torch from one generation of Canadian players to the next, although Fleming offered a simple explanation.

“She went and grabbed the ball to keep it away from the American players and just put it in a Canadian hand,” she said.

The midfielder from London, Ont., stood at the spot and took five deliberate steps back from the ball. She waited several more seconds after the ref blew her whistle, ran up and buried her shot into the side netting on the right side of the goal. Franch had guessed the correct way but was unable to get a hand on the ball.

“I was just trusting myself in that moment to put it in the spot. I knew I could do it,” said Fleming, who added that she had decided the night before which way she would shoot if she had to take a penalty.

After the ball went in, Fleming screamed in jubilation as she ran to the Canadian bench, dropping into a knee slide. It was her 12th international goal, and the first time Canada had scored against the Americans in their past four meetings, dating back to 2017.

“I don’t even think I played that well tonight,” Fleming laughed. “I think it was just really special to be able to contribute to this group.”

Canada’s defence was able to keep the potent American attack largely at bay, although there were some tense moments.

In the 60th minute, U.S. head coach Vlatko Andonovski subbed out his entire front line, bringing on Megan Rapinoe, Carli Lloyd and Christen Press. The move did pay dividends as the trio created more opportunities than the original combination of Morgan, Tobin Heath and Lynn Williams.

In the 65th minute, a shot from Lloyd forced Canadian goalkeeper Stephanie Labbé to make her first save of the game (on the first shot on target for either team), punching the ball over the bar.

After Fleming had given Canada the lead, the Americans did their best to put their foot on the gas. In the 85th minute, it was Lloyd once again, this time with a header that hit the top of the crossbar.

“I couldn’t look at points in the last 10 minutes,” said Priestman. “But all credit to the players. They left everything out there. It meant so much to them to get to this final.”

The backline of Kadeisha Buchanan, Vanessa Gilles, Ashley Lawrence and Allysha Chapman, along with the always-dependable Scott as holding midfielder, did well to stifle much of the American attack. After allowing a goal in each of the three group stage games, Canada has now posted clean sheets in back-to-back matches in the knockout round.

It’s also the first time the Canadians have shut out the Americans since their last win over their rivals on Mar. 11, 2001.

Gilles especially continued to impress in just her ninth cap for Canada. She recorded 19 clearances in the match, six more than the entire American team, and accounted for 45 per cent of Canada’s overall clearances.