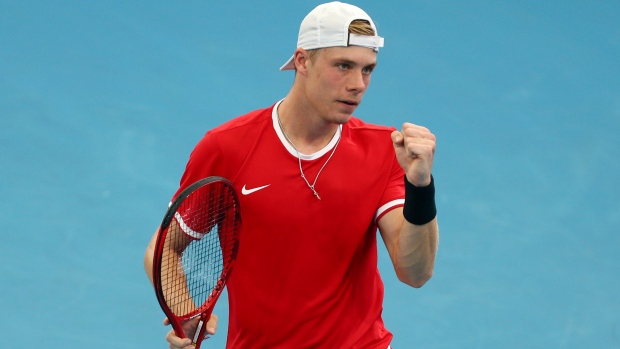 PERTH, Australia — Canada has advanced to the quarterfinals of the ATP Cup.

The Canadians got the help they needed on the final day of the first round, capped by an Argentina win over Croatia in doubles on Wednesday to give Canada the eighth and final berth in the quarterfinals.

Canada (2-1 in preliminary round play), will face Serbia, led by world No. 2 Novak Djokovic, in the quarterfinals on Friday.

The Canadians, who have featured Denis Shapovalov and Felix Auger-Aliassime at the tournament, are coming off a run to the Davis Cup Finals in November.

Great Britain will face Australia, Russia will meet Argentina and Spain will take on Belgium in the other quarterfinals.

Spain advanced to the quarterfinals of the even before Rafael Nadal stepped on to the court Wednesday at the Perth Arena.

Japan needed to beat Spain 3-0 in order for the Nadal-led team not to advance to the Final Eight in Sydney beginning Thursday. Nadal later had a 7-6 (4), 6-4 win over world No. 72 Yoshihito Nishioka, committing 36 unforced errors.

"I always enjoy sharing important moments with friends, and we had a lot of success during our entire careers playing for our country in Davis Cup," Nadal said. “So for us it's a good start, to be able to be qualified for Sydney already. The conditions will be different, and a three-hour time (difference). There's a lot of things we need to adjust to, and the period of time to make it happen is very short."

In other matches on the final day of group play, Serbia, which had already qualified for the quarterfinals, beat Chile in Group A. Dusan Lajovic beat Nicolas Jarry 6-2, 7-6 (3) before Novak Djokovic defeated Cristian Garin 6-3, 6-3.