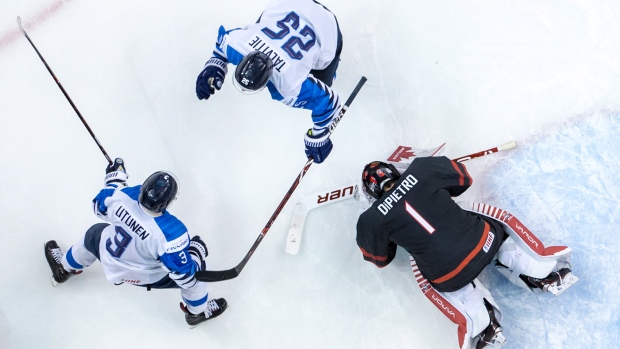 Finland celebrates in front of Michael DiPietro , The Canadian Press

VANCOUVER — Mikey DiPietro’s eyes were as big as saucers. The only thing keeping his jaw from hitting the blue paint in front of him was his chin strap.

Minutes earlier, the raucous 18,000 rocking the red rose to their feet and chanted “Di-Pi-etro” in unison after a string of saves appeared to lift Team Canada to the semifinal. Tears were running down his mom’s face in the stands.

Suddenly, those same fans were holding their hands over their faces in utter shock.

If all of Canada remembers Jordan Eberle’s goal with 5.4 seconds left in 2009, the timestamp of 46.4 will be seared on this tournament’s memory.

Team Canada nursed a one-goal lead for much of the game, only for it to unravel with 46.4 seconds remaining.

“A World Junior game, it’s a fine line between winning and losing,” captain Maxime Comtois said. “We were on the bad side at the end.”

Nashville Predators prospect Eeli Tolvanen shovelled a last ditch prayer toward the net from behind the goal line. It ricocheted off the back of the net, then ran up DiPietro’s sweater and into the net to send it to overtime, commencing a nightmarish series of unfortunate happenstance for Team Canada. Weeks

“The hockey gods, I knew they would help us,” Finland coach Jussi Ahokas said. “We trusted the whole way. To win a game like this, you need bounces. That’s the only way.”

Captain Comtois failed to convert on a penalty shot. The Finns thought it was over. Tolvanen said he couldn’t even watch on the bench. They survived.

Then Noah Dobson’s stick exploded on a one-timer staring down a gaping cage, a sequence that will haunt his dreams for years. The puck squirted the other way, leading to an odd-man rush where Toni Utunen then Finnished off Canada. It was Utunen’s first goal of the season – at any level. Seriously.

“It’s a game of inches, seconds, sometimes even milliseconds,” DiPietro said. “To lose like that is a tough pill to swallow. A loss for words right now. Definitely not the way I pictured this tournament going.”

It’s not the way any Canadian pictured this tournament going because no one has ever seen it go that way. For the first time in history, Team Canada failed to medal in a World Junior Championship on home soil. Canada will now finish sixth after being knocked out by Finland in the quarterfinal for the second time in four years.

“I remember when Canada lost out in the quarters a couple years ago and just how devastated I was watching at home,” said defenceman Ian Mitchell, Canada’s only goal scorer. “So I just want to say sorry for letting all you guys down.”

Some may call it Why Not Wednesday. With Switzerland’s shocking quarterfinal upset of Sweden, this is just the second time in the World Junior modern era (24 years) that neither Canada nor Sweden will be part of the Final Four.

What it should just be called is the New World Order. There should be no scurry to call a summit for Hockey Canada to dissect this loss. It’s a global game now and the sour truth is everyone else is catching up. After winning a combined 27 of the first 33 World Junior gold medals, Russia and Canada have won just three of the last nine.

“There’s no givens here just because it’s in our country that we’re going to win,” coach Tim Hunter said. “It’s a really hard tournament to win. Everyone else is getting better. It’s getting harder to win on a consistent basis.”

This Team Canada entry was never billed as a bunch of world beaters. There were no real stars. They finished with a 5-3 record including the pre-tournament games, their most impressive wins were over Switzerland. They beat just the 7th, 8th and 9th place teams in the tournament and scored just twice in their last two games.

But this is Canada and Hunter will be second-guessed to death for his decision to pick Comtois for the penalty shot. He practised the shootout more than any Team Canada coach ever and studied the numbers.

Comtois did have Canada’s best shootout percentage, 3-for-7 in his QMJHL career.

“I missed my shot,” Comtois said. “I had a move when I started and I stick to it and I missed it.”

But Morgan Frost said earlier on Wednesday he scored on a breakaway on Ukka Pekka-Luukkonen this season in the OHL and “would love” one more chance on a breakaway.

Owen Tippett scored on Pekka-Luukkonen four times this season. Of course, neither was a guarantee to score. The same could have happened to them.

“I’m not going to reflect on what went wrong or what I thought we could’ve done better. That’s over. We’re moving on,” Hunter said. “We’re proud of our players, the way they competed, and the way they came together as a group. It’s a tough pill to swallow.”

The tougher pill to swallow should be the thought that Team Canada did this to themselves. They allowed the ‘hockey gods’ to wreak havoc because they didn’t beat Russia in a game that was served up to them on a New Year’s Eve hors d’oeuvre tray.

They watched Russia torch Slovakia 8-3 later on Wednesday night, a matchup that could have been theirs had they won Group A in the preliminary round. A win on Wednesday would have guaranteed Canada the chance to play for a medal, the chance to keep the streak alive.

Instead, we’re left to wonder what could have been. What if Hunter picked someone else to shoot? What if Dobson’s stick didn’t break? What if Hunter changed up the first power play unit after it closed out the tournament 0-for-16?

“What if?” They are two words, small words that will stick with these teenagers for a lifetime.

“You never like losing, but this is a different type of feeling,” DiPietro said. “A different type of stage, when the country is watching you and supporting you, it’s something that you personally reflect on and regret. You feel like you let your country down.”