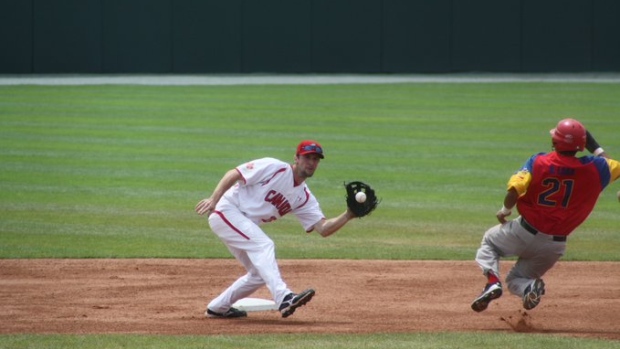 WEST PALM BEACH, Fla. — Carlos Perez and Juniel Querecuto hit home runs and Venezuela's pitchers combined on a one-hitter in a 5-0 win over Canada on Wednesday at the Baseball Americas Olympic Qualifier.

Both teams had already qualified for the weekend's Super Round at the event. However, preliminary results against other Super Round teams are carried forward, giving Venezuela an edge over Canada in the battle for a playoff berth at the upcoming Tokyo Games

Perez led Venezuela (3-0) with three hits, including a two-run homer in the fourth inning.

Jacob Robson singled in the first inning for Canada's only hit of the game.

"We came out flat what can you say,” Canada manager Ernie Whitt said. "We had some opportunities but couldn’t cash it on them.

"We’ll take tomorrow (off) and be ready to play when the crossover games start on Friday."

Oddanier Mosqueda picked up the win for Venezuela, while Travis Seabrooke took the loss for Canada (2-1) after giving up three hits and two earned runs over two innings.

Perez doubled Venezuela's lead in the fourth when he homered to deep left following a walk to Chironos.

Querecuto capped the scoring with a solo homer in the seventh.

Hernandez, Harold Chironos and Henry Centeno then combined for five no-hit innings, striking out eight and walking just one in the process.

The Dominican Republic advanced to the Super Round with a 13-3 rout of Nicaragua on Wednesday. The U.S. will carry a win over the Dominicans into the next round.

The team with the best Super Round record will be declared the winner and will qualify for Tokyo. The second- and third-place finishers will compete at a last-chance qualifier for the sixth and final entry at the Olympics.