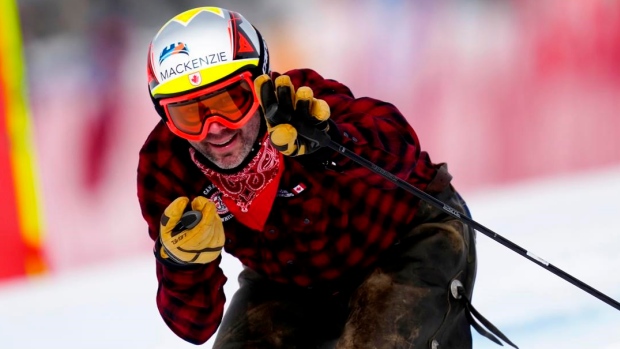 LAKE LOUISE, Alta. — The last Canadian skier to win a World Cup race in Lake Louise, Alta., said farewell to a course Saturday that produced both triumph and heartbreak for him.

Manuel Osborne-Paradis wore rodeo chaps over his jeans for his fun "retirement run" that the world governing body of skiing grants to ski racing's stars on their home courses a few minutes before a race.

The 37-year-old from North Vancouver, B.C., retired last year, but the COVID-19 pandemic cancelled the 2020 edition of what is traditionally the season-opening World Cup men's downhill, delaying the ritual.

He won super-G gold in Lake Louise in 2009. Osborne-Paradis was also the last Canadian to stand on the podium in the alpine team's home race when he finished second in downhill in 2014.

His first World Cup medal was a downhill silver in Lake Louise in 2006.

Osborne-Paradis's previous experience on the track before Saturday was disastrous, however, and ultimately career-ending.

He shattered his tibia and fibula tumbling into the safety nets halfway down the first training run of the 2018-19 season.

Osborne-Paradis began rehabilitating with the goal of racing in a fifth Olympic Games, but the Canadian didn't race again.

The chance to ski the Louise track again in front of fans with a Canadian flag in his hands leaves a better last memory of it in his mind.

"The thing I didn't think was going to be the most important thing, but it was, was going through the finish line one more time," Osborne-Paradis said. "That was a good closing chapter."

Osborne-Paradis's retirement continues a winding down of the "Canadian Cowboys" era in which he, Erik Guay, Jan Hudec and John Kucera were constant threats for the international podium in men's speed races.

Ben Thomsen of Invermere. B.C. is the last active skier in that group. The 34-year-old finished 54th in Saturday's race.

Montreal's Guay, a two-time world champion, wore a double denim "Canadian tuxedo" for his retirement run at Louise in 2018.

Osborne-Paradis, wife Lana and their young children Sloane and Toby live in Invermere.

Osborne-Paradis's family watched him wind his way down the course Saturday and occasionally stop to hug coaches and volunteers.

"I think having my kids here . . . my son never got to see me race and my daughter doesn't remember," Osborne-Paradis said.

"FIS has been so nice to be able to let me do this at this point of retirement. To say thank you to the volunteers here is special."

He's already transitioned into coaching. Osborne-Paradis worked for a year to achieve his Canadian Ski Instructor's Alliance Level 4 certification, which is the highest level of certification.

Only seven per cent of applicants pass the final exams. Osborne, who says Dave Irwin in 1979 was the last national ski team member to achieve the certification, can teach all levels of skiing on all terrain and also train future instructors.

"It was tough," Osborne-Paradis said. "It was a year-long process to get to the exam and then it's a two-day exam. I definitely didn't go into it thinking I was going to pass.

"I wanted to be in the ski world. How can I be a part of it? There's a massive ski community in Canada that the racing world is so disconnected from. How can I go from an alpine racer and further progress my ski career? It dawned on me that I could take this Level 4 instructing exam."

Osborne-Paradis worked with Ontario's under-16 women's team during the week before his swan song.

He passes the racing torch to a young men's downhill team that needs more seasoning to achieve the Canadian Cowboys' heights. They're coached by Kucera.

"They're a good group. They're paving their own way," Osborne-Paradis said. "They have a connection with how we did it through Johnny. They just have to build their confidence and then they can do it."

Toronto's Jack Crawford was the top Canadian in 24th on Saturday ahead of teammate Brodie Seger of Whistler, B.C., in 31st.

Seger's career on the national team overlapped with Osborne-Paradis when the former made his World Cup debut in 2017.

"Manny, I think he has a very unique take on a lot of things," Seger said. "I can for sure take things way too seriously and overanalyze. Sometimes he just has some random comment that cuts through the bull like: 'This is simple. Just be confident and just do this.'

"I feel like I've learned a lot from him in a way. Even through times where he was maybe struggling as a skier, I feel like he was doing a really good job handling himself as an athlete and being honest about how things were going.

"The way he marketed himself, he made it look super-fun and he's just a genuine guy."