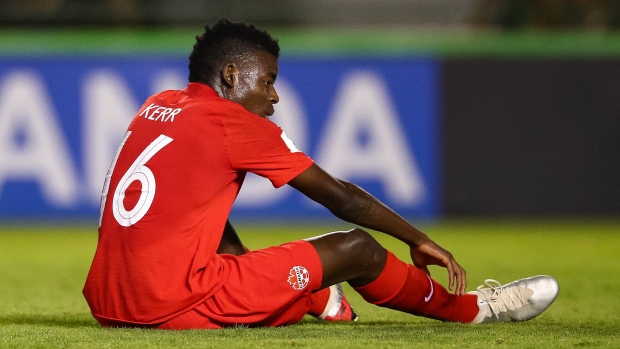 BRASILIA, Brazil — Canada exited the FIFA U-17 World Cup on Friday, beaten 1-0 by New Zealand for a third straight opening-round loss at the tournament.

In their last roll of the dice to reach the knockout round, the young Canadian men deserved a better fate at Estadio Bezerrao. They outshot New Zealand 21-7 (10-4 in shots on target), had 11 corners to New Zealand's two and had 61 per cent of possession.

But video review coupled with New Zealand goalkeeper Alex Paulsen and Matthew Garbett soured the night. Paulsen was rock-solid and Garbett scored in the 27th minute, his swerving free kick from more than 30 yards out eluding Canadian 'keeper Eleias Himaras.

Canada appeared to have pulled even in the 56th minute on a sweet nine-play passing sequence that started with a free kick. The attack ended with Kamron Habibullah chipping a ball to an onrushing Jayden Nelsen that took four defenders out of the play but the Toronto FC academy product beat Paulsen with a right-footed shot.

After the celebrations, the play was negated on video review for offside.

Canada and New Zealand went into Friday's game knowing that a win was needed to have any chance of advancing as one of the best third-place teams. The top two teams in each of the six groups plus the four best third-place finishers advance to the knockout round of 16.

"We were really good tonight but the next step for our program is to learn how to win big games like this," said Canada Soccer's under-20 program director Andrew Olivieri."We're looking for the next players that can develop and excel into the Men's National Team in time and continue to make our program better. Some of these boys are on the path to doing that and I hope they've learned something here that's going to help them along the way."

Canada lost 4-1 to Brazil in the tournament's opening match Oct. 26 before losing 2-1 to Angola on a 94th-minute goal Tuesday. New Zealand lost 2-1 to Angola and 3-0 to Brazil.

Brazil beat debutante Angola 2-0 on Friday to win Group A.

Canada, playing in its seventh U-17 World Cup, is still looking for its first win at the FIFA competition with 17 losses and four draws. The Canadian men have never advanced out of group play.

Canada coach Andrew Olivieri changed goalkeepers with Himaras, from the Toronto FC Academy, replacing Marc Kouadio who had a difficult outing against Angola.

The starting 11 was drawn entirely from players from the Canadian MLS academies with five from the Vancouver Whitecaps including captain Gianfranco Facchineri, four from Toronto FC and two from the Montreal Impact.

Canada came out fast and Nelson had a good chance in the fourth minute, on a feed from Matt Catavolo, but Paulsen made an acrobatic save with his foot.

New Zealand went ahead against the run of play in the 26th minute on a free kick after Damiano Pecile chopped down Garbett with a late tackle. The free kick was tapped to Garbett, whose right-footed shot eluded Himaras.

To rub salt in the wound, Pecile was cautioned on the play.

A looping ball found Oskar van Hattum behind the Canadian defence in the 31st minute but Himaras blocked the shot with his body. Canada escaped a video review of a Facchineri challenge on the Kiwi forward after the save.

Nelsen, another of the TFC academy players, was a danger man on the right wing throughout the half.

Canada had a glorious chance in the 49th minute when Nelsen drove into the penalty box and fed TFC academy teammate Jacen Russell-Rowe who had split the defence. But his close-range shot was stopped by Paulsen who made himself big as he came out to confront the Canadian.

Russell-Rowe has scored in Canada's previous two games, joining Jordan Hamilton and Iain Hume as the only Canadians to score in back-to-back games at the tournament.

Paulsen showed he was human with a poor clearance in the 54th minute. Canada retrieved the ball in the New Zealand half but the Kiwi 'keeper redeemed himself with a fine save off Habibullah after some slick Canadian interplay. Canada hosted the tournament in 1987. It also took part in 1989, 1993 and 1995.

Paulsen frustrated Canada again in the 79th minute with a diving one-hand save off substitute Sean Rea of the Montreal Impact academy.

Garbett had a clear shot to make if 2-0 in the 83rd minute but Himaras somehow got in the way. Nelson had a chance in the 89th minute when a cross came his way after a New Zealand deflection but his shot hit a defender.

The Canadians qualified for Brazil by beating Costa Rica 4-3 on penalty kicks after their quarter-final ended in a 1-1 tie after regulation time at the CONCACAF U17 Championship in Bradenton, Fla., in May. Canada then lost 4-0 to the U.S. in the semifinals.

Twenty of the 21 Canada players in Brazil are with Canadian MLS club academies: eight from Toronto and six each from Montreal and Vancouver.