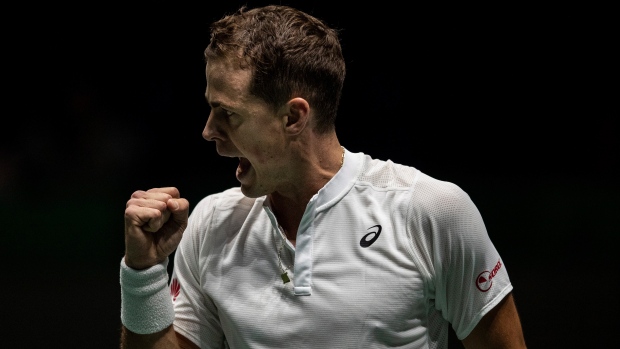 When Vasek Pospisil returned to the tennis court in the summer after missing six months due to back surgery, his main goal was to finish the season healthy.

Not only is his body feeling great, he's also getting big results.

Pospisil has been an unexpected anchor on the Canadian team at this week's Davis Cup Finals in Madrid, picking up two key singles victories en route to a first-place finish in Group F.

"He's just playing very smart and playing aggressive — which is his game style — and playing in conditions which are suited for aggressive play definitely helps too," Canadian doubles coach Daniel Nestor said Wednesday.

With Felix Auger-Aliassime nursing an ankle injury, Pospisil was selected for singles play along with Denis Shapovalov at the 18-team indoor hardcourt tournament at La Caja Magica.

Both players won their openers over Italy on Monday before teaming up for a three-set doubles loss.

The results gave Canada its first-ever Davis Cup victory over the United States and moved the team into Thursday's quarterfinals against Australia, who beat Belgium on Wednesday to win Group D.

Shapovalov, from Richmond Hill, Ont., is the top-ranked Canadian at No. 15. He earned his first ATP Tour title this fall and recently reached the final at the Paris Masters.

"When he's in the rally with anyone, he's basically controlling the rally," Nestor said from Madrid. "He's hitting huge on both sides. He's always dictating the play no matter who he's playing against.

"Now that he's a little more mature and a little more consistent, he's pretty much a good matchup against anyone. It's pretty exciting to see someone with that skillset kind of blossoming."

World No. 103 Brayden Schnur of Pickering, Ont., rounds out the Canadian roster, but suffered an injury at practice Tuesday and is not expected to play this week.

Milos Raonic, the world No. 31 from Thornhill, Ont., did not make the trip due to a back injury. The 21st-ranked Auger-Aliassime, from Montreal, has been nursing an ankle injury.

"It's pretty amazing to think we're in the quarterfinals and we haven't even used those two guys," Nestor said.

He beat then-No. 9 Karen Khachanov at the U.S. Open this year and reached the round of 16 at the Shanghai Masters. Pospisil, from Vancouver, also won two lower-level Challenger tournaments this fall.

The competition is using a new format this year with the six group winners and the next two best teams advancing to the quarterfinals. The final is set for Sunday.

The four semifinalists secure spots in the 2020 Davis Cup Finals. If Canada loses its quarterfinal, it will have to win a qualifying tie next year to return to the main tournament.

With Shapovalov a virtual lock to play singles again Thursday, captain Frank Dancevic has to make the tough call on whether to stay with the hot hand in Pospisil or use the higher-ranked Auger-Aliassime.

The Canadian players held a practice session Wednesday but were not available for interviews.

"He's healthy and he's ready to go," Nestor said of Auger-Aliassime. "Vasek is playing really well so I'm not sure what's going to happen (Thursday).

"But at some point it wouldn't surprise me to see Felix in the lineup."

Alex de Minaur, ranked 18th, and No. 30 Nick Kyrgios offer a stiff 1-2 singles punch on the ninth-ranked Australian side.

Canada is ranked 14th but is comfortable playing higher-ranked teams, as the wins over No. 10 Italy and No. 6 United States attest.

"The way Denis is playing, I don't see him at a disadvantage against really anyone," Nestor said. "Maybe (Novak) Djokovic or (Rafael) Nadal, but in these conditions I don't even know if that's the case."

The Davis Cup was first played in 1900 and Canada made its first appearance in 1913. Canada reached the World Group semifinals in 2013.

Canada qualified for the Davis Cup Finals by topping host Slovakia 3-2 last February. Shapovalov won both of his singles matches and Auger-Aliassime took the decisive match.

"It's pretty special to see that the dream of possibly hoisting the Davis Cup one day soon is reality," Nestor said. "So hopefully it comes this year. If not, I'm sure there will be plenty of opportunities in the near future."

This report by The Canadian Press was first published Nov. 20, 2019.